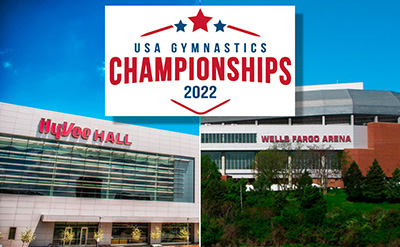 National champions will be crowned across all disciplines, with elite competitions set to take place Thursday through Saturday at Wells Fargo Arena. Earlier in the week and throughout each day, Development Program athletes as well as some junior participants will be in action in Hy-Vee Halls B and C and the Grand Ballroom.

The 2022-23 U.S. Junior and Senior National Teams for acrobatic gymnastics, rhythmic gymnastics, and trampoline and tumbling will be named at the event’s conclusion.

All competition sessions will stream live on FlipNow Powered by USA Gymnastics. Visit FlipNow.tv to learn more and subscribe.

All-session and single-day tickets are on sale now. Learn more about the three-in-one event and who to keep an eye on from all included disciplines below. Additional information can be found on the event’s official website.

Athletes participating in Development Program Levels 8-10 will lead off five days of intense national championship competition Tuesday, June 21 in Hy-Vee Hall B. The 11-16 and 12-18 divisions and the opening round of the 13-19 men’s pair competition will kick off Thursday, June 23 in Hy-Vee Hall B. The remaining 13-19 groups and pairs and all senior elite gymnasts will take the floor Thursday evening from 6-9 p.m. CT in Wells Fargo Arena. All elite titles will be awarded Saturday, June 25.

The full acrobatic gymnastics schedule and rotation sheets are available at usagymchamps.com.

Rhythmic gymnastics
Olympians Evita Griskenas (Orland Park, Ill./North Shore Rhythmic Gymnastics Center) and Lili Mizuno (Northbrook, Ill./North Shore Rhythmic Gymnastics Center) will ride the momentum of matching bronze-medal performances at last month’s Portimao World Challenge Cup and numerous top-ten international finishes in the first half of 2022 into this year’s national championships. Griskenas was the all-around silver medalist and captured the ball title in 2021. Mizuno, who competed with the U.S. group in Tokyo, is returning to the USA Gymnastics Championships as an individual for the first time since 2019.

Fans should also look out for Alexandria Kautzman (Simi Valley, Calif./California Rhythms), who was ninth in the all-around at the Tashkent World Cup in April, Lily Avila (Highland Park, Ill./Vitrychenko Academy), who claimed the top spot on ribbon at the International Tournament Ritam Cup in May, and former National Team member Serena Lu (Staten Island, N.Y./Isadora by Matchpoint), who is back on the competitive rhythmic gymnastics scene after a nearly five-year absence. Lu earned the hoop title at the 2022 Elite Qualifier in her first national appearance of the season. In total, 10 National Team members, including first-year seniors Nayenne Pollini Ashenaffi (Reseda, Calif./Rhythmic Academy of Los Angeles) and Sarah Mariotti (San Diego, Calif./Ingenious RG), will be in the mix.

Six junior groups and the Senior National Group will also be in action.

Level 9 athletes will compete Tuesday, June 21 and Wednesday, June 22 in the Grand Ballroom. The Level 10 competition will follow Thursday through Sunday. Elite gymnasts will battle it out beginning Thursday in Wells Fargo Arena.

The complete competition schedule, rotation start lists and more can be viewed at usagymchamps.com.

Athlete assignments for the upcoming Pan American Championships in Rio de Janeiro, Brazil, and The World Games in Birmingham, Ala., will be announced following the event’s conclusion.

Brown, Bruns, Padilla and Van Natta will use the competition as a final tune up for next month’s The World Games. The USA Gymnastics Championships will also serve as the third and final selection event of 2022 with results helping determine who will represent the U.S. at the 2022 World Championships November 16-19 in Sofia, Bulgaria.

Throughout the week, elite champions will be crowned across individual and synchronized trampoline, double mini trampoline, and tumbling at the youth, junior, intermediate and senior levels, and titles will also be awarded for Development Program Levels 8-10 and in the open category.