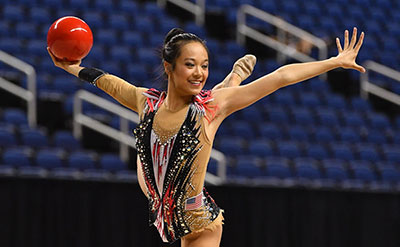 GREENSBORO –The dark chocolate worked. So did the lucky key chains and the cold shower.

Laura Zeng probably doesn’t need all those good luck rituals. Her talents in rhythmic gymnastics were enough for her to earn her fourth-straight gold medal at the USA Gymnastics Championships Saturday. In doing so, she became the first American women to win four straight rhythmic senior all-around titles since Sue Soffe won six from 1976 to 1981.

She’ll stick with her rituals and superstitions for one simple reason – she’s not taking any chances.

“I always have pieces of dark chocolate for energy and for good luck, and I have good luck key chains that I rub,” said Zeng, a 2016 Olympian from North Shore Rhythmic Gymnastics Center. “I also take a cold shower before every competition. They are just little rituals I do to make sure I’m in the right mind set.”

Following a solid performance in the preliminary round, Zeng earned a score of 138.319 in the finals for the gold. Evita Griskenas, also of North Shore, placed second with 135.386, with their teammate Camilla Feeley third at 133.537.

The national championship is an important step on Zeng’s path back to the Olympics. In 2016, she was good enough to place 11th in Rio, and it’s that 11th-place finish that is driving her and insuring she takes no chances.

“I was just one place short of making the all-around finals,” said Zeng, who admits she did better than she thought she would in Rio. “That’s the reason I am pushing for the 2020 Olympics in Tokyo.”

Competing in the Olympics was not on her mind when she took up the sport as an eight-year-old.

“I used to do Chinese dancing, and I had a friend who was in Chinese dancing and rhythmic gymnastics, too,” explained Zeng, the daughter of Chinese immigrants. “She just kind of referred me to the sport and I never stopped.”

Zeng found the multiple elements involved in rhythmic gymnastics to be interesting and challenging.

“I think it’s the combination of everything that I enjoy most about it,” she said. “The equipment handling, the artistic component, also the strength, agility, the hand-eye coordination, and the versatility. And you have to work with different equipment.”

Zeng has a special relationship with the tools of her trade — her ribbon, ball, clubs and hoop. When asked which is her favorite, she wouldn’t say.

“I never like to say,” she said. “I’m a little bit superstitious, and I don’t want any of my equipment getting its feelings hurt. They are all equal in my eyes. I love them all equally.”

Again, why take chances? Tokyo is important to Zeng, an 18-year-old resident of Libertyville, Ill., so important, in fact, she has put off attending college.

“I have been accepted by Yale University, but I decided to take two gap years to try to get to Tokyo 2020,” she said. “For those two years, I will be focusing on gymnastics and giving it my all, but I will also be taking some classes at a community college.”