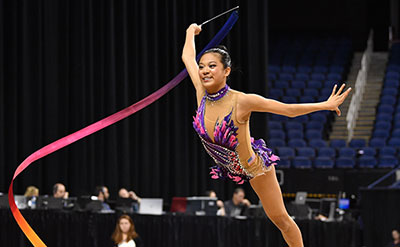 Zeng took top honors for both the clubs and ribbon. For clubs, Zeng posted a 17.717, edging out Camilla Feeley of Highland Park, Ill./North Shore Rhythmic Gymnastics Center, at 17.100. Nastasya Generalova of Los Angeles/California Rhythms, was third with a 16.367. Zeng’s ribbon score was a 16.617 for the title. Feeley and Generalova tied for second at 15.900.

Event information
For the junior and senior elite levels for each discipline, the athletes will vie for national titles. Performances in Greensboro also will determine berths on the junior and senior U.S. National Teams for acrobatic gymnastics, rhythmic gymnastics and trampoline and tumbling. For rhythmic gymnastics and women’s trampoline, the competition will be part of the selection process for the Youth Olympic Games. The Junior Olympic division has several different levels, and national titles will be awarded for each level and age group for each discipline.

Evening session tickets at the Greensboro Coliseum are $40. A $35, single-day pass will be available onsite on competition days.