Waiting for a trip to the Youth Olympic Games is over for Kapitonova, Oh 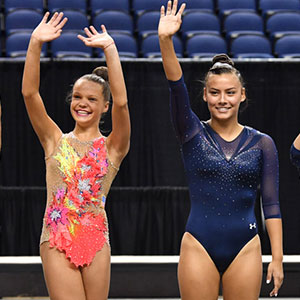 GREENSBORO – The day Alyssa Oh and Elizabeth Kapitonova have been waiting for, training for, anticipating and dreading finally came. July 7 was the day circled on their calendars as the day they would finally find out if they go to the Summer Youth Olympic Games Buenos Aires 2018 in Buenos Aires, Argentina.

Now, they can start thinking about another day – Oct. 15. Oh and Kapitonova qualified to compete in Buenos Aires at the Youth Olympic Games selection event, held in conjunction with the 2018 USA Gymnastics Championships in Greensboro July 3-7.

“Since last year, it’s been my goal to get to the Youth Olympics,” said Oh, who made the U.S. Youth Olympic team for women’s trampoline. “It’s a really great feeling.”

Kapitonova will represent the United States in rhythmic gymnastics.

“This has been a goal of mine since I was 11 years old,” said the 14-year-old Kapitonova. “When you step off that carpet knowing you have done the best you could do, that’s the best feeling.”

Kapitonova had a relatively smooth road through the preliminaries and finals of the USA Gymnastics Championships and selection event, especially compared to Oh.

“I was super confident. I had a good competition last night,” Oh said. “But this morning, I twisted my (left) ankle. I wasn’t sure if I was going to be able to train or not.

“It was obviously upsetting. I did a lot of therapy and rehab,” Oh added. “I had worked so hard, so I was going to compete no matter what. It hurt during my routines, but once I got going and the adrenaline kicked in and you felt the crowd, it was okay.”

Both Kapitonova and Oh are looking forward to some time off, but Oh will rehab her ankle before anything else. Kapitonova has some definite, unchangeable plans.
“I’m going on vacation,” she said matter-of-factly.

The USA’s two newest Youth Olympians are now role models for younger gymnasts. They are asked for pictures and autographs more now than ever before.

“I remember being that little girl coming up to Savannah (Thompson) asking for her autograph. Now all these kids are asking me for my autograph. It’s crazy,” said Oh.

If they are asked for advice on how to kill time on a nervous plane ride to a major competition, they both will suggest watching “Grey’s Anatomy” on Netflix.