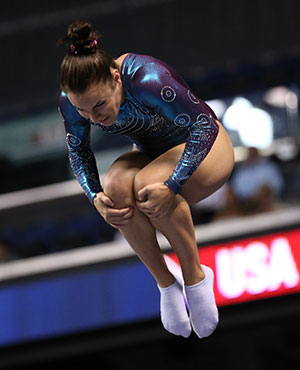 GREENSBORO — Alyssa Oh has Savannah Thompson’s autograph. She got it years ago, because Thompson was where Oh wanted to be — the top women’s trampoline performer in the country.

On Saturday night, Oh and Thompson shared the medal podium at the USA Gymnastics Championship. Thompson is still at the top, but Oh is only two steps below her. Nicole Ahsinger separates them.

Thompson and Ahsinger, both of TNT Express in Lafayette, La., finished one-two in women’s senior trampoline. Thompson, formerly Savannah Vinsant, scored 154.456 for gold. Ahsinger’s 153.250 gave her the silver, while Oh earned the bronze with 153.175.

All three consider their success in Greensboro as validation that they are progressing toward their goals.

Thompson finished sixth in the 2012 Olympics, then retired. She got married, became a stepmother and opened her own gym in Louisiana. She came out of retirement eight months ago to try to earn a shot for the 2020 Olympics in Tokyo.

“I was really excited to just be out there and have a chance to win,” said Thompson. “My last nationals in 2013 didn’t go the way I wanted it to, so coming back and having this kind of outcome is more than I expected.”

“I’m a little disappointed, honestly,” said Ahsinger. “But I’m happy that I finished all three skills, and I’m really happy for Savannah. She’s been working really hard. It’s great to have her back. It pushes me to work harder.”

At 16 years old, Oh competes as a senior nationally, but as a junior internationally. Before the competition began, she set goals of earning a spot in the Youth Olympics and finishing in the top three of senior women’s trampoline.

Earlier in the day, Oh, who competes for World Elite Gymnastics in Rocklin, Calif., won her berth in the Youth Olympics despite twisting her left ankle in practice. She competed in the both the junior and senior events with the ankle heavily taped and very sore.

“I was just running off adrenaline, and it was okay,” said Oh. “Just a minor obstacle. I did all the routines I was planning to do, so I’m really happy. It’s a really good feeling to get it done.”