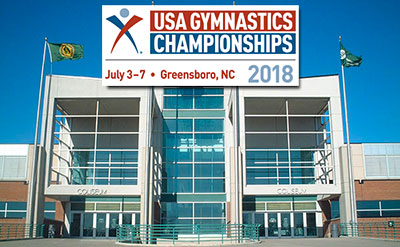 Scheduled for July 3-7 at the Greensboro (N.C.) Coliseum Complex, the competition includes both Junior Olympic and elite levels and is one of the national championships held annually by USA Gymnastics. The rhythmic gymnast and female trampolinist who will represent the United States at the 2018 Youth Olympic Games, scheduled for October in Buenos Aires, Argentina, will also be determined in Greensboro. The senior elite athletes compete in the evening sessions. The sessions at the Coliseum will be webcast live at usagymchamps.com.

For the junior and senior elite levels for each discipline, the athletes will vie for national titles. Performances in Greensboro also will determine berths on the junior and senior U.S. National Teams for acrobatic gymnastics, rhythmic gymnastics and trampoline and tumbling. For rhythmic gymnastics and women’s trampoline, the competition will be part of the selection process for the 2018 World Championships and Youth Olympic Games. The Junior Olympic division has several different levels, and national titles will be awarded for each level and age group for each discipline.

Here’s a quick overview, by discipline, of some of the names to watch for this coming week.

Performances at the USA Gymnastics Championships are part of the selection process for the 2018 Youth Olympic Games. Shannon Xiao of Fairfax, Va./Gymnastics World, clinched a berth to the Youth Olympic Games for the USA when she won the all-around gold medal at the Junior Pan American Rhythmic Gymnastics Championships in Medellin, Colombia. In group competition, the U.S. finished third in the all-around and won the silver medals for 10 clubs and five ropes. The U.S. junior group consists of Anastasiya Ivanova, June Kim, Alexandra Militeeva, Valerie Militeeva, Vianna Ngo, and Ellen Peng, all of San Diego, Calif./Emerald City Academy of Rhythmic Gymnastics.

Here are a few of the national team gymnasts’ achievements on the international stage earlier this year.

For the complete roster of rhythmic gymnasts, please click here.

Trampoline and tumbling
Ahsinger and Thompson headline the trampoline and tumbling field that includes seven World medalists and five defending senior champions Alyssa Oh of Rocklin, Calif./World Elite Gymnastics, who won the women’s individual trampoline gold medal at the 2018 Junior Pan American Trampoline Championships, earned a berth to the Youth Olympic Games for the USA with her first-place ranking in the qualification round.

The World medalists, listed alphabetically, expected to compete in Greensboro are below.

Click here for the entire trampoline and tumbling field.

Event information
Evening session tickets at the Greensboro Coliseum are: July 5 and 6, $35; and July 7, $40. The all-session pass, which grants access to all sessions, is $95. A $35, single-day pass will be available onsite on competition days. Advance tickets may be purchased at the Greensboro Coliseum Box Office, ticketmaster.com or charge-by-phone at 1-800-745-3000.