Kapitonova has her sights focused on defending her 2017 junior title 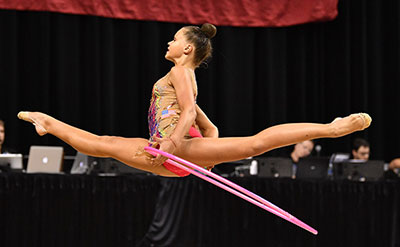 “She is actually different than students I’ve had before,” said Nataliya Kiriyenko, her coach from the New York-based Isadora Rhythmic Gymnastics who is with her at the 2018 USA Gymnastics Championships this week. “What I like and what I respect about her is that she can focus on what she is doing. Sometimes it is hard for me to keep silent before she performs. I want to remind her of several things, but I know her. She has to focus herself. She is going through her routine in her mind.”

Kapitonova, fresh off gold-medal performances at the Junior Pan American Championships and the Pacific Rim Championships, is in Greensboro defending her national championship from last year. She earned the U.S. junior ball and hoop titles Thursday afternoon.

“(My performance) wasn’t perfect,” said Kapitonova. “There are places where I can improve, but I’m really happy with the way I performed. I need to have more expression, more flexibility on elements.

“I’m focused on reaching my goals — to finish national championships with eight clean routines, keep my national title from last year and represent the U.S. at the Youth Olympic Games.”

Poised and confident, Kapitonova has been performing rhythmic gymnastics routines for 12 years, and it has taken her all over the world. She started following her sister, Katarina, a former national team member, when she was two.

“Both of them are very talented, but they are absolutely opposite,” said Kiriyenko with a laugh. “Her sister wanted to have fun. I had to make jokes with her before she went on the carpet.”

While friendly and engaging, Elizabeth has little use for jokes before she performs.

“She is a very interesting person, very interesting in the way she practices, the way her mind works, and a she’s very smart athlete,” said Kiriyenko. “Our main focus is what to do in this moment, this second. She does it herself.”

Elizabeth had no trouble focusing on her craft when she went to Russia to train with world champions Dina and Arina Averina, an opportunity she’s taken advantage of more than once.

“It’s a great opportunity,” Elizabeth said. “I see what they do and learn from them to see how it can help me. I like to work with new people and see what they can offer. The facilities are a little better there with higher ceilings, but it’s not very different than training at home.

“The training is not all that different. It’s the same except they don’t go to school. This year, I missed 70 days of school. But it’s worth it. I’ll do anything it takes to get to my goal.”

And no one will need to remind her to stay focused on that goal.

Junior competition update
Elizabeth Kapitonova, who lives in Staten Island, N.Y., leads the junior all-around standings at the mid-point with a two-event total of 31.767. Lennox Hopkins Wilkins of Puyallup, Wash./Evergreen Rhythmics, is second in the all-round with a 30.167. Jenna Zhao of Burr Ridge, Ill./Vitrychenko Academy Corp., rounds out the top three (29.100).

For hoop, Kapitonova posted a 15.917 to clinch her second consecutive U.S. title. Hopkins Wilkins was second with 14.867, with Matylda Marszalek of Highland Park, Ill./North Shore Rhythmic Gymnastics Center, in third (14.817).

The junior competition wraps up tomorrow with the all-around, clubs and ribbon titles on the line.