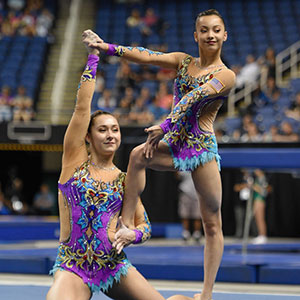 GREENSBORO – One is shy, the other outgoing. One is tiny, the other big enough to hold her in the air. One is hyper, the other laid back. But they have formed a partnership considered among the best in the world for women’s pair in acrobatic gymnastics.

Eighteen-year-old Aubrey Rosilier and 15-year-old Emily Davis won their second-straight women’s pair national title this weekend at the USA Gymnastics Championships. The win extends an impressive and historic run of results, including a recent fourth-place finish at the World Games in Wroclaw, Poland.

“Taking fourth at the World Games is a great accomplishment for us in women’s pair because we have never had representation at the World Games in the women’s pair until this year,” said Ryan Ward, director of acrobatic gymnastics at USA Gymnastics. “For the first time in 30 years, we had all five categories represented at the USA Gymnastics Championships.

“It’s extremely important for our discipline because it shows that we are developing high-level athletes in every event. We’ve had success in mixed pairs, and now we are expanding the success to other categories in our sport.”

Their success has thrown Rosilier and Davis into the spotlight, whether they were ready for it or not. They are regularly recognized at meets now and can sense the stares and covert glances from other gymnasts. All of a sudden, they are role models.

“I feel honored to be able to be known for something,” said Rosilier. “To be the first to do it, starting it for the U.S., is pretty cool.”

Shy by nature, Davis, who admits the nerves she deals with before routines last until halfway to the end, is dealing with the additional attention the best she can.

“I feel they look up to us, and I try to be nice to everyone,” she said. “I just don’t like the pressure of having to perform and be my best all the time.”

Rosilier, the base for the pair, explains. “She’s just shy. It kind of freaks her out. We have been getting more and more attention, though. They ask for pictures a lot. Sometimes I feel like we can’t have bad days, but when we do it just shows them that it’s normal.”

Fame, and the attention that comes with it, may have come quickly for Davis and Rosilier, but according to Ward, they handle it very well.

“What better people to mentor our younger athletes,” he said. “They are the epitome of kindness and humility. They are truly amazing people, as well as athletes. It’s not only that they have set an example with their training and their skill level, but they are also setting examples because of their character and the type of people they are.”

Performing for Acrobatic Gymnastics of San Antonio, Rosiler and Davis have developed a relationship that makes it easy for them to perform together, but friendship is what makes them successful. They seemed to click when they were first paired together two years ago.

“We sort of knew each other before we started,” said Rosilier. “We were comfortable with each other right away. Then we started doing these hard skills and we had to develop trust. That also came with friendship because we rely on each other so much. We get along really well. She’s like my little sister.”

“Sometimes when we are travelling, I’m all hyper and she just wants to chill,” said Davis.

“That’s true, but she is always hyper,” said Rosilier.

When you throw it all together, all the different qualities, you get quite the pair.

“We have found that they are great ambassadors for our sport,” said Ward.