Boynton, Obley team up for first USA Gymnastics Championships as a mixed pair 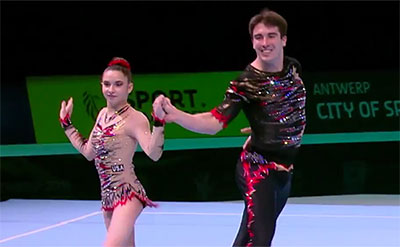 GREENSBORO, N.C. – Aisley Boynton is in familiar territory this week. Sort of.

The 16-year-old Boynton is competing in acrobatic gymnastics at the USA Gymnastics Championship for the fifth year in a row. But there is something drastically different this time.

For the first time in seven years, Boynton is not competing with Maxim Sedochenkoff as her mixed pair partner.

Sedochenkoff retired after competing with Boynton at the 2016 World Age Group Competition in Putian City, China. Her new partner is Sean Obley, a 24-year-old veteran gymnast who lives in Mesa, Ariz.

“We have been together for eight months now,” said Boynton after going through a short practice session in the Greensboro (N.C.) Coliseum, where the USA Gymnastics Championships are being held this week. “We have been practicing mornings and nights since we started working together, so we should be ready to go.”

While Obley, who at 5-8, 181 pounds towers over Boynton, is accustomed to sharing the spotlight on the mat, having just one partner is something relatively new.

“I have never done this kind of balancing before,” he said. “I’m used to having four people, not just one. It’s a lot different.”

They began to gel quickly. From the start, it seemed the pair would be formidable.

“After the first skill we did together, we realized it was pretty good and we were good partners,” said Obley.

The more they worked together, the better they meshed on the mat. The transition from Sedochenkoff to Obley has not always gone smoothly. The challenge of dealing with the ups and downs has been met, however.

“We understand that if either one of us is having a bad day, we are both going to suffer for it,” said Obley. “I know I can trust her to come back after a bad day. If there’s a bad practice or you are tired, you know it’s going to get worse. When we get mad, we can still work together.”

Boynton was very successful with Sedochenkoff. They earned three firsts and a second at the past four USA Gymnastics Championships. They went to the World Championships and World Cup. Performing with someone new was a challenge she readily accepted. She and Obley both knew there would be difficult times, and in such an accelerated time-frame, it would be understandable if nerves and stress got the best of the new partnership.

The pair has overcome all the obstacles to date by paying attention to what is important.

“Trust is everything,” said Boynton. “You have to rely on each other and you have to trust each other. Our trust built pretty fast. If he doesn’t trust me to do my part of the skill, the skill won’t happen.”
Boynton and Obley train at Realis Gymnastics Academy.