As Jeffrey Gluckstein finished his final pass in the men’s individual trampoline event, he stood in the center of the box, pumped his fist up in the air and beamed a mega-watt smile towards the crowd. He knew he had successfully guarded his 5.25 point lead from the night before – as well as the legacy of the “Gluckstein” name – as he and his brother Steven have won ever national title in their event since 2008.

But mere minutes before his strong fight to the finish, the reigning National Champion was battling an entirely different opponent: time.

“It feels amazing now,” Gluckstein said. “But the hardest thing about tonight was the wait. The wait is brutal. I was trying not to think about anything, zone out a bit. Normally in training we take a turn every five minutes so waiting a half hour is not something we normally do; your body gets super cold. You gotta try to keep yourself warm you can’t sit for too long.”

His tactic proved effective, after he maintained his first place position with a score of 168.735, while Ultimate Air’s Stewart Pritchard took second with 161.090 and Paul Bretscher placed third with 158.290. 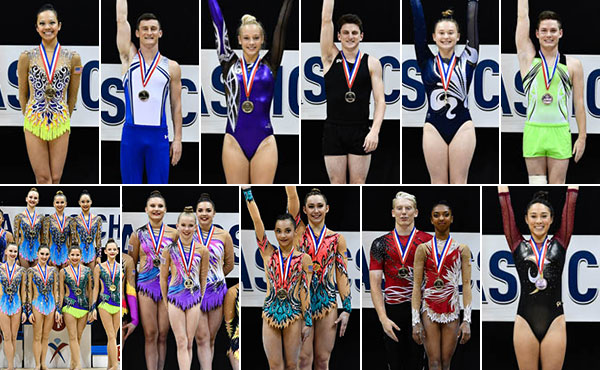 Gluckstein was not alone in his struggle with tonight’s timing. Fellow trampolinist, and 2016 Olympian, Nicole Ahsinger also mentioned that she found it to keep her focus while waiting her turn to jump.

“It was a lot better than last night,” said Ahsinger. “But it was kind of hard because I didn’t have the best warm up and then I went out on the floor and I thought I was going to go right away but I had to wait almost 25 minutes before I had to compete. I kept getting in my head. I was trying to stay positive and think that I can do this and I just went out there. I was a little bit lower but I was way more in the box so I’m happy with it.”

Like Gluckstein, Ahsinger was able to quell any negative thoughts and come out on top, as she earned the national title in the women’s individual trampoline event with a 154.020. Clare Johnson followed in a close second with 149.420 and Hally Piontek placed third with 148.275. In addition to winning tonight’s competition, Ahsinger also became the first Olympian trampolinist – male or female – to return from the Olympics and capture the national title the year after.

Fellow 2016 Olympian Laura Zeng continued to show her consistent excellence by capturing her third consecutive all-around title in Rrythmic with a 138.352. She was followed by Evita Griskenas and Camilla Feeley – all from North Shore Gymnastics – who scored 135.734 and 134.486, respectively.

“I’m so honored to have won the title for the third year in a row,” said Zeng. “It’s just such a great blessing to represent the USA. I can only thank my coaches the USA Gymnastics staff, our program, my parents and everyone that has helped me get to this point.”

The tumbling and double-mini events were more up for grabs as veteran gymnasts Alex Renkert and Austin Nacey squared off to earn a spot at the 2017 World Games.

Luckily, tonight’s outcome provided them both a spot, as Renkert took first in double-mini with a 148.700 and Nacey took first in the tumbling event with 145.400.

“I feel awesome, I have been so nervous and so stressed out, It’s just a relief that everything worked out,” said Nacey after the results were announced. “I was just ready to go this week. I’m super excited to go to World Games with my best friend Alex who is going on double-mini. It should be a blast, I’m going to train hard for it and give it all I have.”

Another close race to the finish was seen in the acrobatic mixed pairs discipline, as Axel Osborne and Tiffani Williams of Realis Gymnastics fought to keep their national title for the third year straight. Aisley Boynton and Maxim Sedochenkoff, also of Realis, had held first place from the night before, but Williams and Osborne were able to bounce back with a score of 83.397 over the latter’s 82.303.

“I’m just so proud that we’ve been able to attain this level and sustain it for so long,” said Osborne. “We really had to focus today to make it happen, we made a mistake in the first routine and we were really making up for that until now. We’re just so happy that we get to say that we’re three time national champions this year.”

While each of the three disciplines participating in the USA Gymnastics Championships are incredibly unique, they all displayed a true depth of talent – and promise for the future.

“I’m really proud of how the sport is coming all together,” said Gluckstein. “We all looked really solid tonight. If we keep growing like this I can’t wait to see where it goes.”