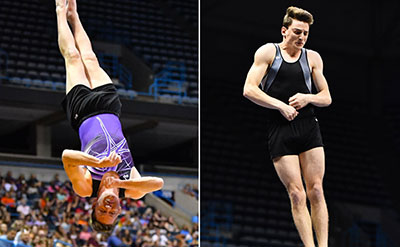 When Alex Renkert decided to retire in late 2015, he had accomplished more than most U.S. men’s T&T gymnasts could’ve dreamed of accomplishing. In Renkert’s 5 years on the senior circuit, he had been named to five World Championship Teams and won a national title in his final season, to compliment his pile of silver and bronze medals from Nationals past.

So, he did what any athlete does once they stop competing: embrace normalcy.

“2015 was when I decided it was going to be my last competition. I felt pretty successful in my career, and I decided to step back and finish school,” said Renkert. “After graduating, I was offered a job at Integrity Athletics as a Marketing Director.”

Sounds like a pretty standard trajectory for a post-grad. But the 24-year-old quickly realized that it wouldn’t be easy to escape the pull of his former life.

“Integrity Athletics just so happened to have a really great trampoline and tumbling program,” he said. “Every day, I had to walk through the gym to just to get to my office. I was still young and capable of competing. I got the drive again, just looking down and watching the other kids practicing. I also watched Nationals from the year before, which I didn’t go to, and wished I had been a part of that.”

Now competing at the 2017 USA Gymnastics Championships, Renkert feels back in his element. But he’s not just here to test the waters; he’s here with an agenda. Of his illustrious career, one accomplishment had always alluded him: the World Games. What drives him more is that he actually qualified for the team and was all set to compete at the Games in 2013, but was unable to after Team USA pulled out of the event.

“In 2013, who was going to go to the World Games was coming down to the wire,” Renkert said. “I got a perfect 10 on one of my scores at Nationals — I think I got a 10 and 9.9 and a 9.8. I barely squeezed in, and it was an awesome moment. We actually trained the first day or two in Columbia, where the Games were held. But then the officials there came out and said you can’t be on the equipment – you haven’t signed the waivers. USA was the only country that did not compete.”

Prior to the 2013 World Games, which were held in Cali, Colombia, the International Gymnastics Federation told its member federations that it found the conditions in Cali to be in violation of its rules and regulations. Because of that, the Federation asked every country to sign a waiver of responsibility to allow their respective athletes to compete. But due to high temperatures and sub-standard training conditions, the U.S. couldn’t sign the waiver in good conscience. So even though Renkert earned his spot at the Games, he never got his moment in the sun.

Fast-forward four years later, the subsequent World Games are scheduled to take place in Poland this Fall. If he scores high enough, the USA Gymnastics Championships this week can land Renkert a spot at the event. After the first day of elite senior competition, he sat behind Austin Nacey, who scored a 73.100 last night in tumbling. Renkert earned a 69.500.

Last night, the two faced off in double-mini, with Renkert leading the standings, boosting his odds of going to the Games.

Nacey, who has been competing for 15 years and says he plans on retiring soon, is taking these Championships just as seriously as Renkert is.

“I tried out for World Games in 2013 but didn’t make it that time,” he said. “This is probably my last year competing. Last year on tumbling I stopped in the middle of the floor and I don’t remember why – so this year I have to win to make it to the World Games.”

“This is our final qualifier. It really increases my drive and motivation a lot,” said Renkert. “But I can see it on both sides, half of me feels really confident because I’ve done this before, and feel like I can do it again. But on the other hand, I feel bit more pressure, it’s like ‘You have done this before but can you repeat? Can you do this again, or are you going to flop?’ I just have to stay focused and do what I do.”