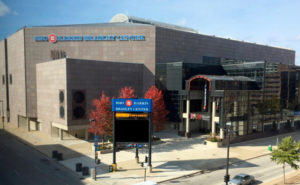 INDIANAPOLIS, Nov. 15, 2016 – USA Gymnastics has awarded the 2017 USA Gymnastics Championships, which showcases more than 1,800 of the country’s best gymnasts in acrobatic gymnastics, rhythmic gymnastics, and trampoline and tumbling, to Milwaukee, Wis. Scheduled for June 27-July 2, Junior Olympic competition will be staged at the Wisconsin Center for the entire six days. The junior and senior elite competition will be held at the BMO Harris Bradley Center from June 29-July 1.

“Milwaukee will be the perfect host for this event,” said Steve Penny, president of USA Gymnastics. “Summertime is a beautiful season in Milwaukee and I am sure everyone will enjoy being there.”

VISIT Milwaukee is working in conjunction with USA Gymnastics on the championships. This is the event’s first trip to Milwaukee, which hosted the 2003 U.S. Championships for men’s and women’s gymnastics.

“Milwaukee is excited to welcome the USA Gymnastics Championships. As a great sports destination with passionate sports fans, we look forward to giving the athletes a memorable experience,” said Paul Upchurch, president & CEO of VISIT Milwaukee.

The competition schedule will be available in the near future and tickets will go on sale in 2017.

The USA Gymnastics Championships was first held in 2014 at the KFC Yum! Center and the Kentucky International Convention Center in Louisville, Ky.; and the other sites were the Greensboro (N.C.) Coliseum Complex in 2015 and the Rhode Island Convention Center and Dunkin’ Donuts Center in 2016. For more information on the USA Gymnastics Championships, please go to usagymchamps.com.

Rhythmic gymnastics is characterized by grace, beauty and elegance combined with dance and acrobatic elements, while working with ribbons, balls, hoops, ropes and clubs in a choreographed routine to music. The choreography must cover the entire floor and contain a balance of jumps, leaps, pivots, balances and flexibility movements. Only four of the five apparatus are competed in competition, based on a two-year rotation. The four for 2017-18 are hoop, ball, clubs and ribbon. Each movement involves a high degree of athletic skill. Physical abilities needed by a rhythmic gymnast include strength, power, flexibility, agility, dexterity, endurance and hand-eye coordination. For rhythmic group, the apparatus for 2017-18 are five hoops and three balls/two ropes, and for 2019-20, five balls and three hoops/two pairs of clubs.