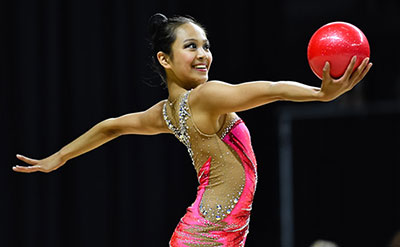 It was the first full session of competition at the Dunkin’ Donuts Center, with nearly 2,000 energetic fans packing into the arena to watch tumbling, double mini-trampoline, rhythmic and acro events in a one-after-the-other schedule.

Olympic hopeful Laura Zeng was the highlight of the night, her hoop and ball performances landing her in first place both times, her collective score totaling 36.90. The 16-year-old from the Chicago area looked poised and focused after saying Thursday she was dealing with nerves ahead of Nationals.

But that was the feeling throughout the night: Nervous energy from competitors who wanted to deliver. Attendees darted their eyes around the building as one discipline followed the other.

The night was kicked off by the U.S. rhythmic group, which has already solidified its spot at the Rio Olympics later this year. Performing with two hoops and three sets of clubs, the North Shore Rhythmic Gymnastics Center team did their routine set to – appropriately – Brazilian music.

While six girls make up the team, five performed in the exhibition Friday night, including Kiana Eide, Alisa Kano,Natalie McGiffert, Monica Rokhman and Kristen Shaldybin. Jennifer Rokhman supported her teammates from the sideline, as only five of them will be selected to be on Team USA for Rio.

Zeng was the athlete that felt the most pressure Friday night, as she won the U.S. its first-ever World Cup medal in rhythmic gymnastics earlier this season. Her hoop routine went off without a hitch, and then she was all smiles in fluorescent pink as she looked flawless in her ball routine to Jennifer Hudson’s “Feeling Good.”

She was feeling good, too.

“That was a very good routine for Laura,” commentator Rebecca Sereda said on the USA Gymnastics livestream.“Much expected.”

Rhythmic athletes complete each of their four routines one by one (Friday and Saturday) before the all around competition on Sunday afternoon and evening.

In double mini, Matthew Hawkins of Aspire in Bentonville, Ark., garnered the crowd’s attention with back-to-back impressive deliveries. He opened with a 36.90 pass to start, and then expanded his lead with a 36.00 to follow, ahead of Casey Chandler in second, 72.90 to 72.50.

Paige Howard stuck her opening pass in double mini and didn’t look back, the World Elite athlete opening a nearly three-point gap between her and Lacey Jenkins in second, 70.20 to 67.80.

“Paige is an amazing double-mini athlete,” said Peter Dodd on the livestream. “One of the highest difficulties in the world. Full and full out straight. Solid in the box, great height. Well done.”

Howard stuck her landing on her second pass, as well.

It was well done throughout the evening for the tumbling athletes, also, who delivered one jaw-dropping pass after the other. Natalie Ory leads on the women’s side with a 63.60. Three-time defending U.S. champion Yuliya Brown was not in attendance.

On the men’s side, favorite Brandon Krzynefski soared to a nearly six-point advantage, throwing down a 36.00 and 36.10 for 72.10 total. The 18-year-old from Virginia was fourth at Nationals a year ago.

Some of the loudest cheers of the night came from what fans saw on center stage, with acro teams competing in nine different disciplines.

Defending U.S. champions in the senior mixed pairs, Axel Osborne and Tiffani Williams are just over half a point behind challengers Aisley Boynton and Maxim Sedochenkoff, both pairs putting out impressive performances.

Osborne and Williams are fresh off a silver medal at the World Championships in April, but Boynton and Sedochenkoff were near flawless and “threw their hat into the ring for the national title,” as commentator Evan Heiter put it on the livestream.

A senior men’s group made its way back to the national stage for the first time since 2005, the team of Carson Breen, Cole Francis, Sinjin Nelson and Luke Schlabach closing the evening out on the acro front with an impressive presentation.

Other leaders in acro include: Emma Bentov-Lagman, Cristin Connerney and Lilianna Dyer in women’s group; as well as Maren Merwarth and Jessica Renteria in women’s pair.

Action continues on Saturday evening for rhythmic and acro, while double-mini and tumbling have the night off as trampoline takes to the floor. Sunday night all disciplines close out competition, with Rio spots being awarded to rhythmic, rhythmic group and both a men’s and women’s trampolinist.