PROVIDENCE – Walk into the Fresh Thyme Market in northern Chicago on any weekday in the early afternoon and you’ll see a blue blur making its way through the aisles: It’s six young women wearing Team USA jackets, the U.S. rhythmic group out to lunch between training sessions.

“We’re like six blueberries walking around the store with our USA jackets on,” said a smiling Kristen Shaldybin, who moved from Brooklyn to Chicago to join the group in 2014, the final piece of the six-member puzzle. “We stand out; people can’t not notice us.”

The U.S. team has begun to be noticed on the world stage over the last four years, as well. In September, the team booked a historic spot at the Olympics, becoming the first-ever U.S. rhythmic group to earn its place at the Games. Five of the six-member team will compete in Rio.

“We really made a concerted effort in 2006 and 2007 to restructure the program and reframe how we were approaching rhythmic gymnastics to be more competitive,” said Caroline Hunt, the rhythmic program director for USA Gymnastics. “Clearly for the Olympic Games, there are berths in individual and group, so if you are trying to get the U.S. to be an Olympic-caliber country, then pursuing both streams creates a lot more opportunity.”

That opportunity came in the form of an email sent out in 2012 after Nationals. Alisa Kano, Natalie McGiffert and twins Monica and Jennifer Rokhman answered the call, later joined by Kiana Eide and lastly Shaldybin. Four of the six girls made moves from outside of Chicago – including from places like Minnesota, California and New York – to make the push to Rio, a road traveled over some four years.

“This sport is such a chapter in our lives,” Shaldybin said. “Especially for me, as the last piece, I’m so happy I’ve done this.” 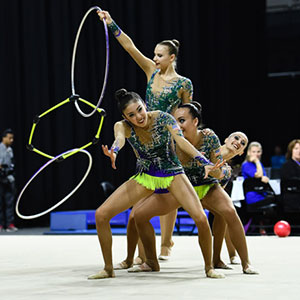 It was in 2012 and leading up to that, the high-caliber individuals were targeted, Hunt explained, after the U.S. had been slowly building its program since 2006. A Pan American Games medal was encouraging, though their group did not qualify for the 2012 Olympic Games in London. But the foundation had been laid.

“Because of that group’s success in 2012, this current third generation of the U.S. group development was even more interested in the possibilities that existed,” said Hunt. “They were willing to not pursue individual because they knew that there was bigger opportunity for five gymnasts versus just one in individual. USA Gymnastics continued to believe in this effort.”

It started with a training camp in Chicago and then bags were packed, four of the girls all enrolling in Glenbrook North High School and training at North Shore Rhythmics. But it also began the process of a coming together, a team learning to operate as one.

“I think from the very beginning we all kind of clicked,” said Kano, 21. “We met at that camp, and we all had personalities that got along so well. Ever since then we became sisters; we’re a family. We’re not afraid to do or say anything in front of each other because we’re so comfortable. I think it’s really important to have that connection with one another.”

“It takes a lot of patience and teamwork,” added McGiffert. “It’s about understanding each other. Everyday something could go wrong, but we all work together to make the best out of the situation that we have.”

It’s a team that has developed more into a family, or, as they like to call each other, sisters.

“We’re the sisterhood of the traveling ribbons,” McGiffert said, laughing.

This weekend in Rhode Island the group has been relaxed but focused: They have done their routines as exhibitions, pressure-packed situations in a Nationals setting ahead of Rio. They then head for competitions in Russia and Azerbaijan before a training camp in Texas in July.

Since qualifying for the Olympics at the World Championships in Stuttgart, they have turned the volume up: Two new routines, two-a-day practices, school on hold and – yes – those lunchtime trips as a unit.

“Since Stuttgart, it’s been the same day everyday: We are in perfection mode,” Shaldybin said. “It’s the same time for our lunch break everyday. People already know that we’re going to go to this place, get the same thing and sit together in one room and go back to practice.”

It’s the kind of move-as-one approach a rhythmic group has to operate with.

In the spirit of doing everything together, they learned about their Rio qualification in such a way, as well. Having placed 13th at the World Championships in Stuttgart in September, they secured their spot by being the top team from the Americas.

Yet they didn’t realize it at first. Having performed in Stuttgart, they went back to their hotel to ready for a team dinner and checked their phones. The USA Gymnastics Twitter account had tweeted out they had qualified for Rio.

Wait… really? was their reaction. Tears of joy followed.

“We were back at the hotel getting ready for dinner and all saw it online at the same time,” said Kano. “It was like, ‘What?! We’re going to the Olympics! Oh my gosh.’”

“We were so happy,” said McGiffert. “We all ran to one hotel room freaking out, crying and bawling. It was shock. We couldn’t believe that it had happened.”

This weekend in Providence has literally been full circle for Shaldybin, who was born in Russia but moved with her family to Brighton Beach in Brooklyn, N.Y. Thursday night she performed in the Dunkin’ Donuts Center, the same arena where her father, Yevgeny, had started his pro hockey career some 20 years prior.

“My dad was telling me about being in the arena stands here, doing my first splits, and watching the goalies do their warm-ups before the games,” Shaldybin said. “It’s like, ‘Wow, this is where it all began for me in gymnastics.’”

Shaldybin revels in the memory of that night, and can’t believe she has made it back under the circumstances she has this year.

“I remember being here with my mom when I was little and going up and down the stairs,” she said.

Each of the athlete’s story is special, but because of Olympic rules, only five out of the six girls will be named to the competition team and one will be declared an alternate. It’s a harsh reality for the unit, which has only grown more and more close the past four years. But they have made amends with it, knowing that it could be any of them.

“The coaches have been very fair about working us all the same,” McGiffert said. “All of us are getting the same opportunities, no matter who is competing on the carpet.”

“Everyday we go through the same goal: We’re training everyday to have clean routines and a clean competition,” added Kano. “Everyone trains the same way. We all have the same mindset in the end.”

No matter who the five are that are selected, the team continues to work, move and yes, eat lunch, as a unit.

“I’m almost speechless,” said Hunt of the Olympic qualification. “It’s truly a dream for the U.S. to have six Olympians go for rhythmic. (The five in group in addition to the qualified individual spot.) I believe these gymnasts are so great and we have so many strong athletes and committed coaches, and I want the world to understand that the U.S. is really pursuing rhythmic gymnastics at a high level.”

“We’ve worked for this our entire lives and sacrificed so much with our families,” said Jennifer Rokhman. “We’ve traveled and moved and taken time away from school. Everything… we’ve overcome injuries and taken our teenage high school lives and put it into this.

She continued: “I would not be the same person without this sport. Now, we have this team and best friends for the rest of our lives. I don’t think there are any regrets for us joining this group.”