With Princeton on the horizon, Lu finds order through gymnastics 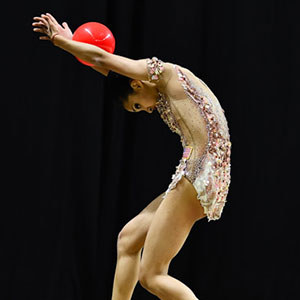 PROVIDENCE – Serena Lu finds it ironic that she is named what she is. She’s not serene, nor is she tranquil, as the name “Serena” means.

“A lot of people describe me as the opposite of serene and tranquil,” Lu said Friday at the USA Gymnastics Championships in Providence. “They always say that I’m so energetic and I like to have fun and I’m really hyper.”

They are qualities, in fact, that have helped the 18 year old from Staten Island find her own in rhythmic gymnastics. Friday she won a silver medal in the hoop competition at Nationals, a mark of improvement over the last three years having left the junior ranks after the 2013 season.

“To watch her as a junior compared to now, she’s two different athletes, which is very rare to see,” said Rebecca Sereda, who formerly trained alongside Lu at Isadora Rhythmics. “When an athlete changes their character, motivation and how they train in the gym, she did a full 180, which is great because the senior competition is so strong.”

Rhythmic gymnastics is as strong as it has ever been in the U.S., in fact. Laura Zeng, Lu’s good friend and national teammate, won Team USA its first World Cup medal in Minsk last month. Zeng, who is two years Lu’s junior at 16, has served as a motivating force in Serena’s life.

“Laura’s work ethic has inspired to me work even harder,” said Lu. “I watch her and I just get inspired. She’s so young, and she knows how to compete already. It’s not the limit for her, and she knows that. She will continue to push her boundaries.”

This fall, Lu will expand her own boundaries when she attends the esteemed Princeton University in New Jersey. It was the choice school over a long list, including institutions overseas. But Princeton’s proximity to Staten Island and Isadora played a large role.

“My decision to go to Princeton was heavily influenced by my gymnastics career,” Lu said. “By going there, I can continue training at home because it’s only about a 45-minute drive. I thought it would be best for me to continue training. I opened the Princeton letter, and right away, I knew that I was going to go.”

Lu recalls that moment last month as a nerve-wracking one. She clicked into the Princeton online portal with shaking hands and was overcome with excitement by the thought of becoming a Tiger.

This week, she made the drive to Providence from New York for mid-week training before Nationals and then returned home for a scholarship interview, making her way back to Providence that same night to ready for competition, which began Friday.

Such a whirlwind lifestyle is something she is used to by now, however, and she learned how to handle much of it from her older sister, Cindy, who was also a rhythmic gymnast before heading to college at Stanford two years ago.

“She was one of my biggest role models,” Serena said of Cindy. “I always got to see her train and I saw what it meant to be a hard-worker in the gym. When I was younger, I didn’t understand how you could balance school and the gym at the same time. She taught me how to do all of that. It’s pretty rigorous. She was the best influence on me.”

Zeng has served as an influence, as well, the both of them training in Russia last month before heading to separate World Cups. In Sofia, Lu’s most recent World Cup, she finished 14th in the all around, having been 12th in the Bucharest Grand Prix at the start of the trip.

“It was a great experience,” Lu said of the trip overall. “Training in Russia solidified my routines; I got to work with some of the best Russian coaches and trainers which was extremely helpful. I feel like I’m at a higher level than I’ve ever been before. I finally feel like I’ve gotten more consistent and it was a great boost for this competition.”

That’s why she will continue at Isadora this fall, a place she said operates “like a family.”

Before she heads to college – where she said she’ll study political science with her eye on being a lawyer – she must graduate from high school, which happens in 10 days’ time in New York. A few days before that? Senior prom.

It’s a schedule that is anything but serene.

“She’s nuts! I mean in a funny way,” said Sereda, who still works as a coach at Isadora. “She’s all over the place. She is a ball of energy. But that’s who she is and that’s what makes her Serena.”

Lu thinks more about her name and then finds middle ground: It’s her gymnastics that helps her find every part of it – the tranquil and the otherwise.

“I do think that at times I can be serene,” she said, laughing. “It’s definitely not my outstanding quality. The expressive part of me is what comes out in my gymnastics, I think. I can be dramatic and emotional too. I’m all of that.”