Osborne and Williams seek to defend U.S. title this week in Providence 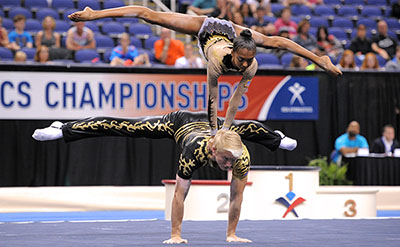 PROVIDENCE – In the late summer of 2014, Axel Osborne was at a crossroads: He wasn’t sure what to do next with his gymnastics, his partner Lydia Webb had gotten injured, and he was considering whether it was best for him to head off to college and take a break from competition.

That’s when – sitting on the tarmac after a flight home to Dallas – he got a call from Arthur Davis, a former mixed pairs world champion.

Come to New York, Davis told him, we want you to work with AcroArmy for America’s Got Talent.

So Osborne, after a call to his mom, did just that. It was in New York that he connected for the first time with Tiffani Williams, a pupil of Youri Vorobyev, whose Realis Gymnastics Academy had served as a starting ground for AcroArmy.

“The team – including Youri – really came together at the right time,” Davis said Thursday in Providence. “They have a magic between them.”

That magic is anchored in Vorobyev, who for two years prior had been training Williams as a part of a trio. But when he saw Osborne, he knew that Williams was the right top for her. The partnership flourished.

“In my 35 years of experience, it’s about intuition,” Vorobyev explained. “I can see when a person can bring a medal for USA. I saw the potential for them.”

This weekend at the Dunkin’ Donuts Center in Providence, Williams and Osborne hope to capture a second straight USA Gymnastics Championships just over two months after that Worlds silver.

And to think: Two years ago they weren’t even a duo.

“Tiffani is easy to work with,” said Osborne, who is now 20. “She doesn’t get upset, and she’s a really hard worker. Anytime we have any struggles, she just brushes it off and keeps working hard. When you have to work in partners, there is a lot of stress between the two of you, and she can just shake it off really quick and we can get back to work.”

The coming together of this team was a special one, however, not just a simple phone call from Davis. Osborne had formerly been working at WOGA in Dallas and when he made it known to his coaches there that he felt like Williams could be a partner to make him – the both of them – great. His coaches supported the decision in full.

Two months after that phone call to go to New York in 2014, Osborne packed his bags for California. He was headed to join Williams and Vorobyev in Southern California. 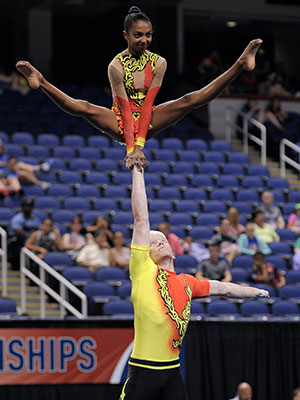 “I felt like everything was up in the air,” Osborne recalled. “I wasn’t sure where my life was going to go at that point. But it came together through what appeared to be mistakes and mishaps. It figured itself out.”

Valeri Liukin, Yevgeny Marchenko and Brandi Wren at WOGA were behind the move, as well. It was a moment of two gyms coming together, working hand-in-hand.

“Athletes switch gyms all the time, but this happened very amicably,” said Davis, who won World golds in 2001 and 2004. “The coaches really wanted it to happen. It was a friendly partnership. Harmonic, actually.”

Williams, 14, is looking forward to a homecoming of sorts this weekend after their trip to Putian, China, for Worlds.

“I feel we have to prove ourselves again,” she said, a smile coming over her face. “I’m a little nervous. Everyone is talking about us performing. We want to be our best.”

While another national title is the ultimate goal for the team this season (there is no mixed acro pairs at the Olympics), their second-place finish at Worlds earned them a spot at the World Games in Poland in 2017.

Osborne credits Youri for a good amount of their success, saying he’s brought out something neither of them knew that they had inside of them, and it comes to life for them when they’re on the floor.

“Youri knows the way you have to think to win, not only how you have to practice,” Osborne said. “It’s a lot different from training other places. In mixed pairs, your partnership has to be really good. The training is very much about emotions and working together and not just about your body. It’s about how you train.”

The hope is for more success this weekend; the culmination of training together the last 20 months.

“Every time you hit a routine or feel good about the work you’ve put in, you create something that the whole crowd cheers for,” Osborne said. “That makes you feel like you’re doing everything right. It makes you feel like people like what you do. That’s exactly what we want and that’s why we train.”