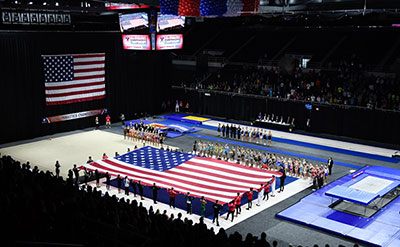 PROVIDENCE – Sometimes things don’t go exactly as you plan them.

Saturday night was one full of the unexpected – both good and bad – at the USA Gymnastics Championships at the Dunkin’ Donuts Center in Providence, as national champions were crowned and a slew of athletes took a step closer to realizing their Olympic dreams.

There will be no Olympic dream for Charlotte Drury, however, the favorite in the women’s trampoline event who had secured the U.S. its berth for the Rio Games at this spring’s test event and led the Olympic qualifying points standing.

Drury pulled out of the event prior to its start with an injury, a broken talus on her right foot sustained during a Friday training session. The Laguna Niguel, Calif., resident had a hard time hiding her hard feelings.

“This is the hardest day of my life,” Drury shared on Twitter. “To watch my dream disappear the day before it could come true … But no doubt, this isn’t the last of me.”

Trampoline fans hope not, Drury having been 11th at the World Championships in 2015 and owner of a World Cup gold medal from Minsk in 2014.

“We’re missing one of our top females now,” said men’s 2015 national champion Steven Gluckstein. “But I’m sure she will be back in four more years. I’m really sad for Charlotte, her family and her team.”

Nicole Ahsinger, a youth Olympian in 2014, soared to a 96.410 and first place. She was in second behind Drury in qualifying points with two, meaning she’ll head into Sunday’s finals with a nearly two-point lead on Shaylee Dunavin, who was second. Dakota Earnest and Clare Johnson are also within striking distance.

Steven Gluckstein is not too far behind, as well, trailing Logan Dooley in what has turned into a hotly contested men’s trampoline event. Gluckstein won the night with a 106.400, but Dooley’s 105.635 gets three full points added to it from his qualifying position, launching him into first.

Aliaksei Shostak was the only other man to top 100, at 103.020. Steven’s brother, Jeffrey, had a heartbreaking start to the night, flying into the safety mat off of the trampoline during his first routine. He finished 17th and missed the final.

“I really don’t have any words,” Steven said of his brother Jeffrey’s mistake. “He’s my brother and I love him. He’s been working so hard and has been so focused. My heart hurts for him.”

The brothers shared a warm embrace when Steven capped his night in the fifth rotation, the Olympic dream still alive in the Gluckstein household.

“I know it’s probably not good for me to add up the math,” Steven said in regards to Sunday and his position behind Dooley. “Should I do my best, it’s possible I can come out ahead. But it’s trampoline; you never know what is going to happen.”

For the second consecutive night, it was a lively crowd inside “The Dunk,” fans taking in trampoline as well as side-by-side floors of acro and rhythmic gymnastics, the latter including clubs and ribbon national titles up for grabs.

Laura Zeng, favored to qualify for the U.S. as the rhythmic individual, was at her shimmering best again, the 16-year-old winning the ribbon competition and placing second in clubs. Camila Feeley was champion there, her first national title.

“I just put out all my power on the floor,” Feeley said, having collected hardware in hoop (bronze) and ball (silver), as well. “Overall, I’m proud of my performances. I had fun and tried not to think about the results.”

Zeng won gold in hoop, ball and clubs, setting herself up for a confident Sunday in which she’ll try to officially earn the one allotted rhythmic spot for the U.S. in Rio. Her two-point cushion over Feeley in the preliminary rankings in the all around helps assure her she’ll have room to spare when the pressure is on the most.

Though not Olympic eligible, the acro competition once again infused an abundance of electricity into a night that was already oozing with excitement on Saturday.

Defending senior mixed pair Tiffani Williams and Axel Osborne clawed back from a Friday night deficit edging ahead of Aisley Boynton and Maxim Sedochenkoff 55.783 to 55.313, a good portion of the crowd standing at the completion of Williams and Osborne’s balance routine.

The duo earned a World Championships silver medal in April in China.

The U.S. rhythmic group that will head to Rio opened the evening, some two and a half hours earlier, this time with a balletic and flawless ribbon routine. Kiana Eide, Alisa Kano, Natalie McGiffert, Jennifer and Monica Rokhman and Kristen Shaldybin earned their spot at the Olympics having finished 13th at Worlds last season.

It was a night of both soaring and plummeting emotions, as well. On trampoline, Dunavin and Johnson shared a hug after their completed routines, clearly shaken by the news of an out-of-competition Drury, who watched on – crutches close by – from the sidelines.

USA Gymnastics livestream host Evan Heiter called Earnest’s first trampoline routine “slammin’” (it was) and after her second routine Earnest let out a massive smile, bringing her hand to her forehead… in relief.

Much of the action came in the fifth and final rotation, as Steven Gluckstein, Dooley and Shostak rotated on and off of the trampoline, Feeley and Serena Lu performed in rhythmic and the senior mixed pair and men’s group owned the floor in acro.

The biggest roar of the night may have been for Dooley, who has twice before been the Olympic alternate for the U.S. men on trampoline in 2008 and 2012. He stuck his first routine to thundering applause inside the Dunkin’ Donuts Center, and should he stay solid on Sunday, he’ll need to book his flights to Rio as soon as he’s able.

But, as Saturday reminded us: What’s to come is what we expect the least. Or is it?