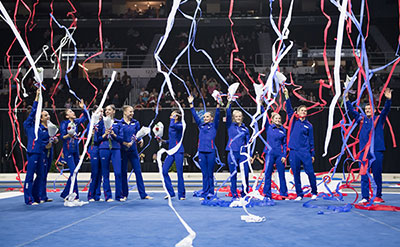 Sunday night was full of it at the USA Gymnastics Championships at the Dunkin’ Donuts Center in Providence, R.I., as Logan Dooley and Nicole Ahsinger were edged out for respective national titles in trampoline, but boosted by Olympic qualifying points to Rio positions, earning official berths for Team USA in Rio.

In the rhythmic event, the night belonged to Laura Zeng from the start, the Chicago-area teen a runaway winner as she captured the all-around title and stamped her tickets to the Olympic Games, as well.

Five members of the U.S. rhythmic group were officially selected for Rio after earning their way at the 2015 World Championships in September: Kiana Eide, Alisa Kano, Natalie McGiffert, Monica Rokhman and Kristen Shaldybin will compete, while Jennifer Rokhman was named the replacement athlete.

While the night was full of hardware winners, it was the trampoline that was the tightest-contested and most compelling to watch. In the final rotation of the night – the last act – Dooley delivered when he needed to the most, stepping onto the trampoline to chants of Logan! Logan! from around the arena.

Ahsinger found herself in a similar scenario to Dooley, runner up to Shaylee Dunavin on the Nationals scoreboard (148.160 to 147.530), but able to utilize an Olympic qualifying point to vault her ahead – and to Rio.

The women’s trampoline event was without favorite Charlotte Drury, who had been lost to injury on Friday during a training session. Drury and Jeffrey Gluckstein were the Olympic qualifying leaders coming into Providence, Jeffrey faltering on Saturday in his opening routine, meaning he failed to qualify for Sunday’s finals.

Zeng, who had won national titles in three out of four apparatus in the first two days of competition, looked at her peak Sunday, the 16-year-old sweeping all four of the apparatuses over two final-day sessions, scoring a 145.950 in total. Camilla Feeley was in second place at 142.000 points, while Serena Lu won the bronze with a 140.350.

Steven Gluckstein will serve as Dooley’s replacement athlete in Rio, Dunavin in the same role for Ahsinger and Feeley for Zeng.

“I’m so satisfied and extremely relieved to have done my job,” Zeng told reporters after qualifying. “It’s been a long year. To be able to have earned this spot and to represent the U.S., it’s an incredibly exciting moment for me.”

“I feel like I’m on top of the world,” added Dooley, who is 28. “I can’t put it into words. This has been a dream for so long and sometimes they are just that – dreams – but tonight I made mine a reality. It’s slowly seeping in.”

While the Olympic suspense was what highlighted the night, the five-rotation evening was loaded with action from 6 p.m. onwards, as national champions were crowned in tumbling, double mini and acro in addition to trampoline and rhythmic.

In tumbling, Brandon Krzynefski was a nine-point winner over Jackson Tyson, while Emilio Lehmer won the bronze. Natalie Ory edged out Eliza Floisand on the women’s side, Kaylah Whaley finishing third.

Casey Chandler was the double-mini champion for the men, nailing the landing on his first pass of the night, while Kristie Lowell captured the title for the women.

Once again the crowd was electrified by the performances on the acro floor, the pairs and groups executing body-bending gymnastics set to well-picked music and delivering a host of memorable routines.

“That was beautiful,” he said as the two marched off the carpet.

Tiffani Williams lost her scrunchie mid-routine with Axel Osborne, but the two captured their second-straight senior mixed pair national title having won the World Championships silver medal in China earlier this year. They overcame a first-night deficit against Aisley Boynton and Maxim Sedochenkoff, their training partners, totaling 84.037 to 82.983 to end the competition.

After Dooley’s solid performance, he left the trampoline’s mat and then walked back onto it, putting his hands on his hips as he bent over, clearly soaking in the moment.

Minutes later he and Steven Gluckstein embraced, the two hugging when it was clear that one (Gluckstein) was the national champion and the other (Dooley) was headed to the Olympics.
“Steven and I have been competing together for a very long time,” Dooley said of Gluckstein, who represented the U.S. in 2012 in London. “It’s been a long road. I’m glad it was the two old dogs battling it out.”

In rhythmic, Feeley is – like Zeng – 16 and a star on the rise. She “takes a different approach,” said livestream commentator Rebecca Sereda of Feeley’s gymnastics. “And the judges really appreciate that.”

Zeng, however, was the gymnast that stood out once again in what was a high-quality rhythmic event. She heads to Rio with her head held high having recently won the U.S. its first-ever World Cup medal in rhythmic, as well.

“The lady in red is the lady of the hour,” said Evan Heiter on the livestream, noting Zeng’s striking clubs costume. “She’s moving all over the carpet,” Sereda added. “It’s great to watch.”

Dunavin was great to watch, too, noted Peter Dodd on the livestream. “That was such a solid performance,” he said. “Beautiful.”

She and Ahsinger are training partners in Lafayette, La.

The night ended after 10 p.m. in Providence, when, after the medals had been handed out to each of the discipline’s national champions, the eight Olympians and four replacement athletes were presented to a still-rocking Dunkin’ Donuts Center.

As balloons fell and confetti blasted out of rockets, the night had what felt like a fairytale ending. The twists and turns – literally – to get there, however, were must- see.