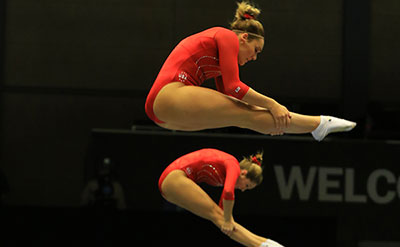 PROVIDENCE, R.I., June 8, 2016 – Logan Dooley of Lake Forest, Calif/World Elite Gymnastics, and Steven Gluckstein of Atlantic Highlands/Elite Trampoline Academy, and Shaylee Dunavin and Dakota Earnest, both of Lafayette, La./Trampoline and Tumbling Express, won the senior men’s and women’s synchronized trampoline titles, respectively, on the first day of the 2016 USA Gymnastics Championships at the Rhode Island Convention Center in Providence, R.I. Competition continues tomorrow with Junior Olympic competition at the convention center, and junior and senior elite competition resumes on Friday, June 10, at the Dunkin’ Donuts Center at 1 p.m. and 6 p.m., respectively. The 2016 USA Gymnastics Championships is the Olympic selection event for rhythmic gymnastics and men’s and women’s trampoline for the 2016 Olympic Games in Rio de Janeiro, Brazil.

Dunavin and Earnest won their second straight women’s synchro crown by posting a 128.400. Nicole Ahsinger of Lafayette, La./Trampoline and Tumbling Express, and Clare Johnson of Huntsville, Ala./The Matrix Gym, Inc., finished in the runner-up spot with a 120.300. Rounding out the medals podium were Delilah Glidden of Laurel, Md./Fairland Gymnastics, and Courtney Walsh of Red Bank, N.J./Elite Trampoline Academy, at 117.000.

USA Gymnastics Championships information
Scheduled for June 8-13, the six-day championships includes both Junior Olympic and elite levels and is one of the national championships held annually by USA Gymnastics. In addition to the junior and senior elite competition June 10-12 at the Dunkin’ Donuts Center, Junior Olympic sessions run all six days at the Rhode Island Convention Center. At the conclusion of the senior competition on June 12, USA Gymnastics will name the U.S. rhythmic group and the first three individual members of gymnastics’ 2016 U.S. Olympic Team, pending approval by the United States Olympic Committee: one for individual rhythmic gymnastics and two for trampoline (one male and one female). The U.S. group, which qualified to the Games outright, will identify its five-person roster.

On Friday at 4 p.m., the USA Gymnastics Championships Kick-off Celebration presented by iHeart Media is a fun gathering for athletes and fans alike leading into the first night of the senior elite competition. Held outside on the street between the Hilton Providence and the Dunkin’ Donuts Center, the Kick-off Celebration is free to the public. Activities include DJs, an inflatable obstacle course, temporary face tattoos, local mascots, carnival games and the University Orthopedic Art in Motion booth, to name a few. As part of the celebration, Providence Mayor Jorge Elorza and USA Gymnastics President Steve Penny will be on hand to rename the street, “Rhode to Gold.”

For the junior and senior elite levels for each discipline, the athletes are vying for national titles. Performances will determine berths on the junior and senior U.S. National Teams for rhythmic gymnastics and trampoline and tumbling. The Junior Olympic division has several different levels, and national titles will be awarded for each level and age group for each discipline. The Junior Olympic levels for each of the disciplines are: acrobatic gymnastics – Levels 6-10; rhythmic gymnastics – Levels 7-8; and trampoline and tumbling – Levels 8-10.

The Dunkin’ Donuts Center competition schedule, which is outlined below and subject to change, has the junior and senior elites competing June 10-12. For a complete schedule, please visit USAGymChamps.com/schedule.

Rhythmic gymnastics is characterized by grace, beauty and elegance combined with dance and acrobatic elements, while working with ribbons, balls, hoops, ropes and clubs in a choreographed routine to music. The choreography must cover the entire floor and contain a balance of jumps, leaps, pivots, balances and flexibility movements. Only four of the apparatus are competed each quad, and the four for 2016 are hoop, ball, clubs and ribbon for seniors and hoop, ball, clubs and rope for juniors. Each movement involves a high degree of athletic skill. Physical abilities needed by a rhythmic gymnast include strength, power, flexibility, agility, dexterity, endurance and hand-eye coordination.