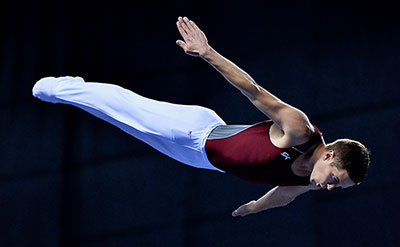 PROVIDENCE – To make the Olympic team having been the U.S. alternate two times prior, trampolinist Logan Dooley is taking his cues this year from one of the most famous fabled fliers in history: Peter Pan.

“He never grows up, he never ages,” Dooley said Thursday at the USA Gymnastics Championships in Providence, R.I. “He has fun everyday. That’s his motto in life, and I think that’s an awesome motto to live by.”

It’s a motto that Dooley has tried to apply to a season in which he has shucked his “adult responsibilities” (namely his full-time coaching gig) for that Olympic dream, focusing his energy on his training ahead of this weekend, when one U.S. man will earn that coveted Rio berth in trampoline.

Dooley is splitting his time between his base in Lake Forest, Calif., with coaches Robert Null and Peter Dodd, and Chicago, where he has worked with Kyle Bowen.

“I’ve definitely shaken things up this season,” said Dooley. “In 2012, I was really trying to play a lot of roles, making a living coaching. This year, I’ve tried to change that. I’ve taken a step back from coaching and have focused more on just myself. I needed to get away from the responsibilities that I have taken on with being an adult and being a gymnast. It’s not very fun to be an adult, I’d rather be Peter Pan forever and jump and fly while I can.”

That Neverland-inspired approach has appeared to work so far. He leads the U.S. men in Olympic qualifying points, and in April teamed with Jeffrey Gluckstein to help secure Team USA its trampoline berth in at the Test Event in Rio.

Having been a trampoline gymnast since the age of seven, it was necessary to shake things up, memories of disappointment from 2008 and 2012 still lingering.

“It’s been a slightly different approach, but I’m still the same person,” Dooley said. “I needed to go with what I know works. Having been close two times before is in the right direction… but I needed that little bit of, well, a change.” 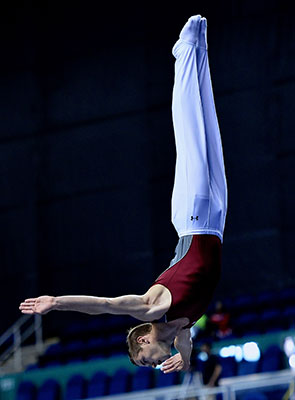 It’s ignited a new kind of Logan, one you could almost call kid-like. He’s focused and fit, inspired by a sport that he isn’t ready to give up, even if this might be his last shot at the Olympics. He’s found the fun again, thanks in part to his frequent trips to Chicago over the last six months.

“It was like, ‘OK, I’m sacrificing work and making money and focusing on what I need to focus on,’” Dooley said of his Rio-specific decision. “It gave me the sense of putting all of this first.”

Dooley calls himself a “showman.” He loves a crowd, loves performing. When he was 6, he jumped on his bed so much he broke it. He parents acquiesced and gifted him a backyard trampoline for his 7th birthday. Six months later, he was attempting tricks on it that they felt warranted some sort of supervision. That’s when they found Null, still his coach today, in the yellow pages of the since-forgotten phonebook.

Dooley still looks up to Jennifer Parilla, the first American Olympic trampolinist, who competed in Sydney when the discipline made its debut at the Summer Games in 2000. She trained at the same gym as him.

“When I saw her jumping and doing the Olympic thing, that’s when Olympic hopes went into play for me,” he remembered, no Olympics having existed for trampoline when he started in 1994.

Knowing he is “not the chosen one yet,” Dooley has stiff competition in Jeffrey and Steven Gluckstein, as well as Aliaksei Shostak. Dooley served as alternate to Steven in 2012 and Chris Estrada in 2008.

The Olympics are on his mind in Providence. How could they not be?

“It’s something that I’ve wanted for a very long time,” he said. “It would be a dream come true to be out there and representing my country on the ultimate stage. With my everyday training, I like to keep it light and have fun because I can’t always have the pressure on me otherwise it’s too much. But when it’s time for pressure, I like that feeling of being able to step up to the plate in the moment.”

Unless you’re Peter Pan, however, you have to grow up. At 28, Dooley has decided this will be his last attempt at an Olympic team.

With no Olympics to dream of before 2000, Dooley said he started the sport as a kid because it was a love, a passion. That’s why he continues still today.

“I did it purely for fun,” he said. “I enjoyed the feeling of jumping and flying and floating through the air. I just loved it, so I stuck with it.”