Tickets for 2016 USA Gymnastics Championships are on sale now 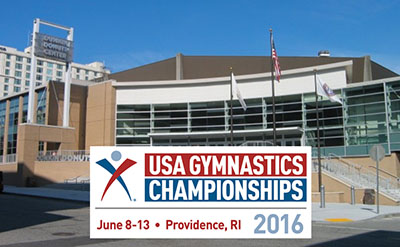 
For the junior and senior elite levels for each discipline, the athletes are vying for national titles. Performances will determine berths on the junior and senior U.S. National Teams for rhythmic gymnastics and trampoline and tumbling. The Junior Olympic division has several different levels, and national titles will be awarded for each level and age group for each discipline. The Junior Olympic levels for each of the disciplines are: acrobatic gymnastics – Levels 6-10; rhythmic gymnastics – Levels 7-8; and trampoline and tumbling – Levels 8-10.


Performances at the USA Gymnastics Championships will determine which athletes will represent the United States in rhythmic gymnastics and men’s and women’s trampoline at the 2016 Olympic Games, pending approval by the United States Olympic Committee.


The USA Gymnastics Championships was first held in 2014 at the KFC Yum! Center and the Kentucky International Convention Center in Louisville, Ky., and in 2015 at the Greensboro (N.C.) Coliseum Complex.


Rhythmic gymnastics is characterized by grace, beauty and elegance combined with dance and acrobatic elements, while working with ribbons, balls, hoops, ropes and clubs in a choreographed routine to music. The choreography must cover the entire floor and contain a balance of jumps, leaps, pivots, balances and flexibility movements. Only four of the apparatus are competed each quad, and the four for 2016 are hoop, ball, clubs and ribbon. Each movement involves a high degree of athletic skill. Physical abilities needed by a rhythmic gymnast include strength, power, flexibility, agility, dexterity, endurance and hand-eye coordination.