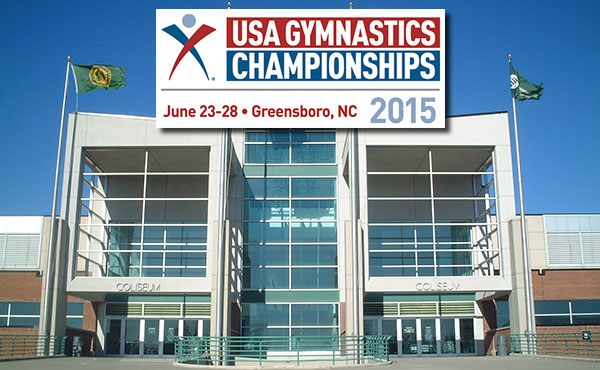 INDIANAPOLIS, June 23, 2015 – More than 1,700 of the country’s top gymnasts in acrobatic gymnastics, rhythmic gymnastics, and trampoline and tumbling will compete at the 2015 USA Gymnastics Championships, June 23-28, at the Greensboro (N.C.) Coliseum Complex. The six-day national championships feature competition on both Junior Olympic and elite levels. A Kick-off Celebration, which includes recognizing Olympic Day, is slated for 4 p.m. on June 25, when the junior and senior elite gymnasts begin competing. The Junior Olympic competition spans all six days.

The Kick-off Celebration, held in front of the southeast corner of the Special Events Center (near the Pavilion), will be a fun gathering for athletes and fans alike leading into the first night of the senior elite competition. Three U.S. Olympians – Ron Galimore (1980), Steven Gluckstein (2012) and Jennifer Parilla (2000, 2004) – will be recognized in honor of Olympic Day. The planned activities include a drumline, DJ, magician, face painting and an Instagram photo opportunity, to name a few.

In rhythmic gymnastics, berths for the 2015 Pan American Games in Toronto, Ont., Canada, July 10-26, are on the line. The USA qualified for two spots for individual rhythmic gymnastics, as well as rhythmic group. The Pan Am squad will be determined following the completion of the USA Gymnastics Championships according to the published selection procedures. The trampoline team for the Pan Am Games was named in April.

For the junior and senior elite levels for each discipline, the athletes are vying for national titles. Performances will determine berths on the junior and senior U.S. National Teams for rhythmic gymnastics and trampoline and tumbling. The Junior Olympic division has several different levels, and national titles will be awarded for each level and age group for each discipline. The Junior Olympic levels for each of the disciplines are: acrobatic gymnastics – Levels 6-10; rhythmic gymnastics – Levels 7-8; and trampoline and tumbling – Levels 8-10.

Here’s a quick snapshot of the returning champions and athletes to watch in the senior competition.

About the USA Gymnastics Championships
On sale now, evening session tickets at the Greensboro Coliseum are: June 25 and 26, $25; and June 27, $30. The all-session pass, which grants access to all sessions at both venues, is $80. For the events at the Coliseum Complex’s Special Events Center, a $30, single-day pass will be available onsite on competition days. Tickets may be purchased at the Greensboro Coliseum Box Office, ticketmaster.com, all Ticketmaster outlets, or by phone at 1-800-745-3000. For more information on the USA Gymnastics Championships, please go to USAGymChamps.com.

The local hosts for the event are the Greensboro Area Convention and Visitors Bureau, Greensboro Coliseum Complex, Tournament Hosts of Greensboro, Greensboro Sports Commission, and Sports & Properties, Inc. Greensboro played host to the AT&T American Cup, the premier international invitational held in the United States, and the Nastia Liukin Cup in 2014.

The schedule, outlined below, has the junior and senior elites competing June 25-27, with Junior Olympic sessions running all six days. NOTE: Level refers to the Junior Olympic competition level. The schedule is subject to change.

Rhythmic gymnastics is characterized by grace, beauty and elegance combined with dance and acrobatic elements, while working with ribbons, balls, hoops, ropes and clubs in a choreographed routine to music. The choreography must cover the entire floor and contain a balance of jumps, leaps, pivots, balances and flexibility movements. Only four of the apparatus are competed each quad, and the four for 2016 are hoop, ball, clubs and ribbon for seniors and hoop, ball, clubs and rope for juniors. Each movement involves a high degree of athletic skill. Physical abilities needed by a rhythmic gymnast include strength, power, flexibility, agility, dexterity, endurance and hand-eye coordination.

In 2014, the USA Gymnastics Championships was held at the KFC Yum! Center and Kentucky International Convention Center in Louisville, Ky.