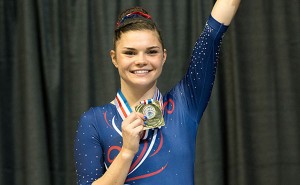 
A special feeling comes over Erin Jauch when she believes something good is about to about to happen, when she rids her mind of any doubt, when she’s sprinting down the runway confident of sticking that landing.


“You feel it right from your feet when that happens,” Jauch said with a laugh.


Jauch of Crystal Lake, Ill./Fox Valley Tumbling and Trampoline, is the defending world and U.S. champion in women’s double mini trampoline. Soon she’ll be off for the USA Gymnastics Championships on June 24-28 in Greensboro, N.C., where she’ll try to win her fourth senior national title in the double mini since 2011.


Later this year, she hopes to collect back-to-back individual golds at the World Trampoline and Tumbling Championships on Nov. 21-30 in Odense, Denmark. The World Age Group Competitions (WAGC) for youth will be held after the main event.


“I remember thinking before the world championships last year in Daytona (Fla.), I said that if it ended well, it might be my last year and I’d retire – mainly because of school,” said Jauch, 20. “But here I am. I’ve been working on some new stuff to stay active. I would say now that my ultimate goal is to repeat in Greensboro and Denmark and break both world (scoring) records that I currently hold.”


Jauch’s individual gold in double mini was one of three medals – and only gold – earned by the United States team at last year’s worlds in Florida.


She rode the confidence she gained in qualifying all the way to her last pass in the finals. When she hit her first trick – a 1 ½ twisting double front – Jauch felt a surge of happiness that carried her through the rest of the routine. After nailing her next bounce — a full-in, back out straight – well, she was grinning from ear to ear after sticking her landing.


When she earned another 35.70 – matching the score of her first pass – Jauch was stunned to learn that she had a set a meet record with a total score of 71.40.


As she waited for her the medal ceremony, Jauch was reading her congratulatory messages when she came across a video of her performance that had just occurred.


As good as it felt, Jauch was suddenly bitten by the motivation bug.


“I was, ‘Oh, yeah! I can do better than that!’” she said. “I was already looking at all the corrections that needed to be done to make it better.’’


After the medal ceremony, it took a nudge from her mother to make Jauch realize all she had accomplished.


Jauch has been coached by her mother for years — longer than Erin has been able to write her own name.


“Almost since I was old enough to walk,” Erin said.


Stacy Jauch has owned Fox Valley Tumbling and Trampoline in McHenry, Ill., for 18 years. The youngest of four children, Erin has been competing on the double mini since she was 5.


The all-in-the-family approach that has worked for Erin for as long as she can remember, she said.


“Although I was around it all of the time, once I started getting older, she (her mother) didn’t push me at all,” Erin said. “I’d take weeks during the summer off, or take it slow. She didn’t want me burning out.”


Jauch also played sports in high school. She said that her training as a sprinter has been the source of her bouncing power that catapults her to towering heights.


“On double mini, I go higher than most,” she said. “People who I compete against sometimes say, ‘Erin, how do you get so high?’ I think it’s because I run really fast.”


Jauch, who’s taking classes at two colleges to become an ultrasound specialist, said her mother keeps her motivated and on task when it comes to her sport and juggling her career. She trains four days a week, and keeps a detailed journal of what she’s been working on.


“For 17 years, my mom has been coaching me,” Jauch said. “Everyone wonders how we do it. I remember we had a rough patch at the (age) 13 stage – I was a little bit sassy – but we we’ve always been able to work through it.