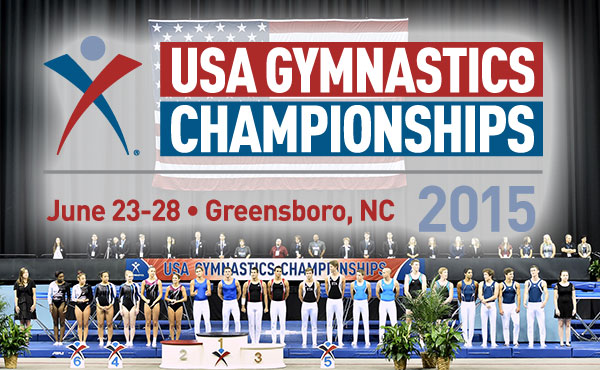 INDIANAPOLIS, June 11, 2015 – Six individual, plus men’s and women’s synchronized trampoline, senior elite champions from 2014 are among the more than 900 trampoline and tumbling gymnasts who will compete at the 2015 USA Gymnastics Championships June 23-28 at the Greensboro (N.C.) Coliseum Complex. The six-day competition is the national championships for acrobatic gymnastics, rhythmic gymnastics, and trampoline and tumbling, and it features competition on both Junior Olympic and elite levels. The junior and senior elite gymnasts compete June 25-27, with the Junior Olympic competition spanning all six days.

The entire trampoline and tumbling field includes more than 900 gymnasts, representing 37 states. The senior and junior elite levels are the highest competitive levels, and Junior Olympics is the age-group, developmental program. The complete junior and senior elite field roster is included below.

About the USA Gymnastics Championships
Tickets are on sale now. Evening session tickets at the Greensboro Coliseum are: June 25 and 26, $25; and June 27, $30. The all-session pass, which grants access to all sessions at both venues, is $80. For the events at the Coliseum Complex’s Special Events Center, a $30, single-day pass will be available onsite on competition days. Tickets may be purchased at the Greensboro Coliseum Box Office, ticketmaster.com, all Ticketmaster outlets, or by phone at 1-800-745-3000. Group discounts are available for groups of 10 or more by calling 336-373-7433 or emailing greg.marston@greensboro-nc.gov. For special pricing for gymnastics clubs, contact the Greensboro Coliseum Group Sales Department at 336-373-7433 or greg.marston@greensboro-nc.gov. For more information on the USA Gymnastics Championships, please go to usagymchamps.com.

The local hosts for the event are the Greensboro Area Convention and Visitors Bureau, Greensboro Coliseum Complex, Tournament Hosts of Greensboro, Greensboro Sports Commission, and Sports & Properties, Inc. Greensboro played host to the AT&T American Cup, the premier international invitational held in the United States, and the Nastia Liukin Cup in 2014.

The schedule, outlined below, has the junior and senior elites competing June 25-27, with Junior Olympic sessions running all six days. NOTE: Level refers to the Junior Olympic competition level. The schedule is subject to change.

In 2014, the USA Gymnastics Championships was held at the KFC Yum! Center in Louisville, Ky.