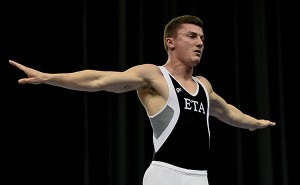 
Steven Gluckstein has a few minutes to squeeze in an interview, but those few minutes are about all he can spare with his hectic schedule.


The 24-year-old gymnast is about to board a plane bound for St. Petersburg, Russia, for a trampoline and tumbling world cup. This competition comes on top of his role as a coach, a business management student at Rutgers and an athlete training to maintain his status as an elite trampolinist.


“To say that I am a busy man is an understatement,” Gluckstein said. “But it has definitely taught me time management. I feel that anything I do in my future will be easier than what I am doing now.”


The immediate future includes a hopeful top-eight finish at the world cup this weekend.


The goal seems realistic, but just a few months ago would’ve been extravagant.


Last year, Gluckstein broke his right forearm. He wondered not long ago whether he’d even be competing in the world cup, let alone setting high expectations for it.


In February, the 2012 Olympian from New Jersey resumed training. By April, he’d won the U.S. Elite Challenge in just his second meet since the injury. Now he ventures into international competition for the first time.


“My progress has been much faster than expected,” Gluckstein said.


Then there’s the upcoming USA Gymnastics Championships later this month in Greensboro, North Carolina, and the 2015 Pan American Games in Toronto, which Gluckstein qualified for with his win at the U.S. Elite Challenge.


Click here to read the rest of the article.