Out of retirement, Hall of Famer Rodrigues eyes 2016 Acro Worlds 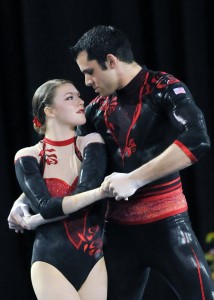 He was retired. That’s what Michael Rodrigues thought. That’s what he told himself, told others, after Rodrigues won his fourth national title and a gold medal in the mixed-pairs all-around with partner Kristin Allen at the 2010 Acrobatic Gymnastics World Championships.

But then one day last fall, something happened. He was coaching at his home club, West Coast Training Center in Livermore, Calif., when, suddenly, an opportunity presented itself.

Make that, an opportunity disguised as a challenge.

He was helping head coach Marie Annonson search for a suitable base for Ani Smith, who was looking for a new partner after returning from performing for the 17-person AcroArmy on NBC’s America’s Got Talent.

And the thought occurred to Rodrigues…

“I jokingly said, ‘Well, put me on the bottom. Maybe I’ll come back,'” Rodrigues recalled.

Annonson asked if Rodrigues was serious. After all, he had just learned that he and Allen were among nine individuals who’ll be inducted this summer in the USA Gymnastics Hall of Fame.

But something inside Rodrigues told the gymnast that he wasn’t finished.

“I was definitely ready to retire when I did,” he said. “Kristin and I had won all the big meets. We had done everything we could do, and had gone out on top of our game. And then after, Cirque (du Soleil) was right there, so that was a perfect transition.”

Everything Rodrigues said about he and Allen was true; their resume brimmed with success. They won the USA’s first World Games gold medal in acrobatic gymnastics as a mixed pair in 2009. A year later, they won the World title. And domestically, the duo won national titles in 2008 and 2010.

Prior to competing with Allen, Rodrigues was teamed with Clare Brunson, winning national titles in 2005-06 and a World bronze.

But after a few training sessions with Smith last fall, Rodrigues, 32, felt energized, inspired – and ready to compete again.

“I thought, ‘Maybe I can go one more round and get a medal with a third partner – that’s something that no one has ever done,’” he said. “And that became a motivation. I felt like I have one more in me. Ani is a real talented athlete, and she deserves one more shot to show it, also. I’d like to help her achieve something, and at the same time, I have something new to achieve, as well.” The first step in Rodrigues’ comeback begins this week when he and Smith attend the Acro Cup Training Camp at the USA Gymnastics National Team Training Center in Huntsville, Texas.

Although it’s not a competition, the camp is mandatory for all groups wanting to be considered for the 2016 World Age Group and World Championships in China. Routines start Friday.

“They’ll be viewing all of the potential athletes,” Rodrigues said of the selection committee. “They’ll take a look at where everybody is at and get a handle on the potential teams for next year.”

He said it has been challenging working with Smith. But in a good way.

“We definitely had to start over,” Rodrigues said. “It’s timing and grip, and we have to kind of learn the other person’s little quirks. It’s been new and exciting, and it forces you to focus even more. We’re building all those connections and we’re finding our own style. It takes a long time to build that trust and timing, and I think so far our strength is that we’re meshing. She’s dynamic and has good timing. She’s flying super high on our big skills.”

He said Allen – her Hall of Fame former partner – is excited for the duo.

Training again as an elite athlete has reminded him about the attention needed to take care of his body. He and Smith train for three-and-a-half hours every day. He also coaches four hours each day.

“I’ve definitely noticed a big difference in how I recover – especially from 10 years ago when I was 22,” Rodrigues said. “Back then, I was training twice a day every day and working a job between the two.

“I feel a little more fatigued than I did before now. I sleep more. But I get to bed a little earlier and do ice and heat when I need to.”

Asked for his goals, he said: “I think we’re right where we need to be. We’re putting big skills on the floor – high-level difficulty skills. We’re definitely building. By the time we get to nationals, we’ll be close to where we want to be. I wouldn’t say we could go out and win a big competition today, but we’re definitely on track.

“The goal is to make the national team, go to World team trials, make the World team and go win a medal for the U.S. That’s the ultimate goal.”