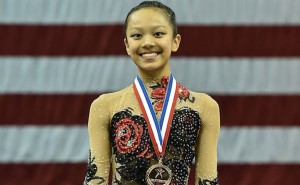 
Zeng, who will compete in the Youth Olympic Games in August, also has the lead in the junior all-around preliminary standings at the halfway point at 32.200. She earned the hoop title with her 16.250 and her 15.950 secured the ball crown.


Camilla Feeley of Lincolnshire, Ill./North Shore Rhythmic Gymnastics Center, was the silver medalist for both hoop and ball, as well as ranking second in the all-around preliminary rankings. For hoop, Feeley garnered a 15.150 and a 15.400 for ball. Her all-around prelim score after two events is 30.550.


Nicole Kaloyanov of Woodbridge, Va./Gymnastics World, was the bronze medalist for hoop at 15.100, and Brigita Budginas of Agoura Hills, Calif./Burlo Gymnastics, was third in ball with 14.950. Kaloyanov also is third in the junior rhythmic preliminary rankings at 29.900.


Junior rhythmic gymnastics continues tomorrow morning with the event finals for clubs and ribbon and the conclusion of the all-around preliminaries.


The senior elite sessions for acrobatic gymnastics, rhythmic gymnastics and trampoline are scheduled for 6 p.m. July 17-19, with the finals slated for Saturday night, at the KFC Yum! Center. The junior elite sessions for those three events, also at the KFC Yum! Center, begin at 9 a.m. all three days. The Junior Olympic sessions for all three disciplines are being held at the Kentucky International Convention Center, and the sessions begin at 9 a.m. The elite competition for tumbling and double mini-trampoline will also be held at the Kentucky International Convention Center at 9 a.m., with the preliminary round on July 18 and the finals on July 19.


Evening session tickets at the KFC Yum! Center are: July 17, $20; July 18, $20; and July 19, $25. The all-session pass, which grants access to all sessions at both venues, is $75. A $25, single-day pass is available for the events at the Kentucky International Convention Center onsite on competition days. Tickets may be purchased at the KFC Yum! Center or Kentucky International Convention Center box offices, ticketmaster.com, all Ticketmaster outlets, or by phone at 1-800-745-3000.