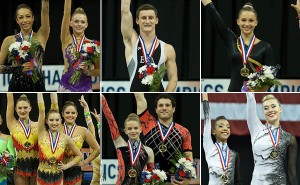 
The USA Gymnastics Championships, the national championships for trampoline and tumbling, rhythmic gymnastics and acrobatic gymnastics, had competition at both the KFC Yum! Center and Kentucky International Convention Center over five days.


Rhythmic gymnastics
For the first time in U.S. rhythmic history, Kerber and Sereda tied for the all-around title with a total of 129.100. This is Sereda’s third consecutive senior all-around crown and Kerber’s first as a senior. Serena Lu of Staten Island, N.Y./Isadora, was third with a total of 123.650.