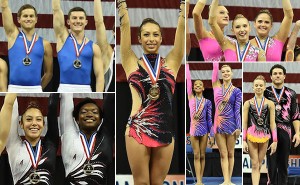 
With competition held at both the KFC Yum! Center and Kentucky International Convention Center, the USA Gymnastics Championships is the national championships for trampoline and tumbling, rhythmic gymnastics and acrobatic gymnastics. Tomorrow’s senior finals at the KFC Yum! Center include rhythmic gymnastics – clubs and ribbon; and acrobatic gymnastics – women’s group (dynamic), mixed pair (balance) and women’s pair (balance). The elite competition for tumbling and double mini-trampoline at the Kentucky International Convention Center begins on July 18 at 9 a.m., with the finals on July 19.


Acrobatic gymnastics
Boynton and Ward, fresh from winning the World bronze medal for mixed pair at the recent World Championships, took the top honors for the mixed pair dynamic routine with a 28.487. West Coast Training Center’s Eirian Smith and Brian Kincher, both of Livermore, Calif., were second at 27.253.


In women’s group, Silverman, Antoniades and Ruppert won the balance title with a 28.263. Second place went to Xtreme Acro’s Daphne Kirschner of Rockville, Md., Mackenzie Meyer of Silver Spring, Md., and Savannah Bentley of Annapolis, Md., at 27.260. Rounding out the top three were Tiffani Williams of Moreno Valley, Calif., Leslie Munoz of Homeland, Calif., and Katelyn Recktenwald of Riverside, Calif., all of Realis Gymnastics Academy, with 26.743. Wilson and Maurer’s women’s pair score was 26.287.


Trampoline
Dooley and Gluckstein came back from a mistake in the prelims to take the senior men’s synchro title with a 127.900. Aliaksei Shostak of Lafayette, La./Trampoline and Tumbling Express, and Jeffrey Gluckstein of Atlantic Highlands, N.J./Elite Trampoline Academy, jumped into second (112.000), followed by Colin Duda of Atlantic Highlands, N.J./Elite Trampoline Academy, and Mitch Dewey of Walker of Mich./Great Lakes Griffins (99.400) in third.


Earlier in the day, Cody Gesuelli of Middletown, N.J./Elite Trampoline Academy (99.575) and Nicole Ahsinger of San Diego, Calif./SoCal TTC (95.490), earned the top men’s and women’s scores in the junior elite trampoline division. Both will represent the USA in the Youth Olympic Games in Nanjing, China, in August. The top eight men and eight women in junior elite trampoline division advanced to the finals, which will be held on Saturday.


For results, a more detailed schedule, other information and a live webcast of the elite sessions at the KFC Yum! Center, please go to USAGymChamps.com.