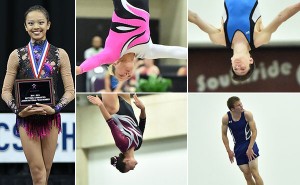 
Rhythmic gymnastics (junior)
Zeng, who will represent the USA in the 2014 Youth Olympic Games in August, won her second consecutive U.S. junior all-around title, adding to the hoop and ball crowns she won earlier this week. Zeng’s combined winning total was 126.400. Camilla Feeley of Lincolnshire, Ill./North Shore Rhythmic Gymnastics Center, was second with 120.200, and Ekatherina Kapitonova of Staten Island, N.Y./Isadora, completed the top three with her 117.200. The junior rhythmic gymnastics all-around finals were held at the KFC Yum! Center in Louisville, Ky.


Double mini-trampoline and tumbling
Nacey won the tumbling gold medal with a 134.900. After qualifying in the top spot, Alex Renkert of Indianapolis, Ind./Geist Sports Academy, dropped to second in tumbling with a 134.600. He also placed third in double mini with a 140.600. Garrett Wheeler of Locust Grove, Ga./Flip City South, followed in third in tumbling (131.800). In the senior men’s double-mini final, Stewart Pritchard of Greensboro, N.C./Ultimate Air TNT, completed two solid runs for a 143.500 and the gold medal. Casey Chandler of Reno, Nev./Legacy T&T (142.600) was second.


For the senior women, Stankevich-Brown notched her fourth U.S. tumbling title with a score of 127.900. Cheyenne Kelley of Broken Arrow, Okla./Oklahoma Extreme (120.100),earned the silver medal, and Choyce Hays of Jenks, Okla./Oklahoma Extreme (106.800), claimed the bronze. In double-mini, Erin Jauch of Crystal Lake, Ill./Fox Valley T&T, held onto her lead from the preliminary round to win the national title with a 141.400, followed by Alyssa Long of McHenry, Ill./5 Star Elite (130.300), and Breanne Millard of Mission Viejo, Calif./World Elite Gymnastics (129.500).


Evening session tickets at the KFC Yum! Center for tonight are $25.