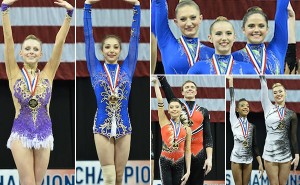 
Acrobatic gymnastics
For the mixed pair balance routines, Smith and Kincher won with a 28.830, finishing just ahead of Kiley Boynton and Ryan Ward, both of Riverside, Calif./Realis Gymnastics Academy, who earned a 28.213. In women’s group, Silverman, Antoniades and Ruppert posted a 27.100 to clinch the title. Xtreme Acro’s Daphne Kirschner of Rockville, Md., Mackenzie Meyer of Silver Spring, Md., and Savannah Bentley of Annapolis, Md., were second with 26.080, followed by Lily Bowler, DeShay Eisenmenger and Natasha Villarreal, all of Boerne, Texas/Boerne Gymnastics Center, at 24.153. Wilson and Maurer’s women’s pair score was 26.573.


Rhythmic gymnastics
For clubs, Kerber easily won the title with her 16.050. Serena Lu of Staten Island, N.Y./Isadora, and Gabrielle Lowenstein of Huntington Beach, Calif./Eurogymnastics, tied for second with 15.700. Shamuilov brought home the ribbon gold with a 15.800, which put her ahead of Rebecca Sereda of Staten Island, N.Y./Isadora, at 15.550 and Kerber’s 15.350.


The senior elite finals for acrobatic gymnastics, rhythmic gymnastics and trampoline are at 6 p.m. July 19 at the KFC Yum! Center. The junior elite finals for those three events are also at the KFC Yum! Center and begin at 9 a.m. The Junior Olympic sessions for all three disciplines are being held at the Kentucky International Convention Center, and the sessions begin at 9 a.m.

For results, a more detailed schedule, other information and a live webcast of the elite sessions at the KFC Yum! Center, please go to USAGymChamps.com.