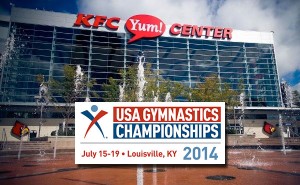 Also competing are Nicole Ahsinger of San Diego, Calif./SoCal TTC, and Cody Gesuelli of Middletown, N.J./Elite Trampoline Academy, who will compete in trampoline at the 2014 Youth Olympic Games in Nanjing, China, this August.

The entire trampoline and tumbling field includes 819 athletes competing on the elite and the Junior Olympic levels. They hail from 37 states across the country. For the field list, please click here.

The rhythmic field has 221 gymnasts from 17 states. For the field roster, please click here.

Event information
The senior elite sessions for acrobatic gymnastics, rhythmic gymnastics and trampoline are scheduled for 6 p.m. July 17-19, with the finals slated for Saturday night, at the KFC Yum! Center. The junior elite sessions, also at the KFC Yum! Center, begin at 9 a.m. all three days. The Junior Olympic sessions for all three disciplines will be held at the Kentucky International Convention Center, and the sessions begin at 9 a.m. The elite competition for tumbling and double mini-trampoline will also be held at the Kentucky International Convention Center at 9 a.m., with the preliminary round on July 18 and the finals on July 19. For a more detailed schedule and other information, please go to USAGymChamps.com.