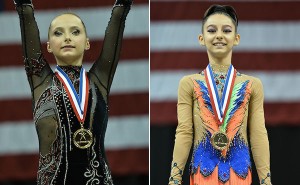 
Laura Zeng of Libertyville, Ill./North Shore Rhythmic Gymnastics Center, earned the highest preliminary all-around score of 61.650. Feeley was right behind Zeng with 60.700, and Kaloyanov rounded out the top three at 59.100. The top eight advance to the finals on Saturday morning, and scores carry over to the finals.


The senior elite sessions for acrobatic gymnastics, rhythmic gymnastics and trampoline are scheduled for 6 p.m. July 18-19, with the finals slated for Saturday night, at the KFC Yum! Center. The junior elite sessions for those three events, also at the KFC Yum! Center, begin at 9 a.m. each day. The Junior Olympic sessions for all three disciplines are being held at the Kentucky International Convention Center, and sessions begin at 9 a.m. The finals for elite tumbling and double mini-trampoline are at 9 a.m. on Saturday at the Kentucky International Convention Center.