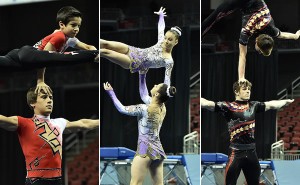 LOUISVILLE, Ky., July 18, 2014 — Three of the 2014 U.S. titles for balance and dynamic in acrobatic gymnastics at the 2014 USA Gymnastics Championships at the KFC Yum! Center in Louisville, Ky., were won by pairs that are 2014 World Age Group Competitions medalists. The World medalist pairs that won both the U.S. balance and dynamic titles are: 12-18 men’s pair – Konstantine Partalas and Collin Davis both of San Antonio, Texas/Aerial Athletics; 12-18 women’s pair – Katarina Partalas and Kathleen Davis, both of San Antonio, Texas/Acrobatic Gymnastics of San Antonio; and 13-19 men’s pair – Bryan Allen, San Jose, Calif., and Brennan Atsatt, Santa Cruz, Calif., both of Aerial Tumbling & Acro Gymnastics. Competition at the KFC Yum! Center continues this evening in trampoline, rhythmic gymnastics and acrobatic gymnastics. The USA Gymnastics Championships, held at both the KFC Yum! Center and Kentucky International Convention Center, is the national championships for trampoline and tumbling, rhythmic gymnastics and acrobatic gymnastics.


The remaining junior elite champions from today are as follows.


The senior elite sessions for acrobatic gymnastics, rhythmic gymnastics and trampoline are scheduled for 6 p.m. July 18-19, with the finals slated for Saturday night, at the KFC Yum! Center. The junior elite sessions for those three events, also at the KFC Yum! Center, begin at 9 a.m. each day. The Junior Olympic sessions for all three disciplines are being held at the Kentucky International Convention Center, and sessions begin at 9 a.m. The finals for elite tumbling and double mini-trampoline are at 9 a.m. on Saturday at the Kentucky International Convention Center.