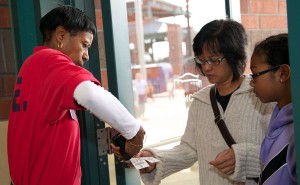 INDIANAPOLIS, June 19, 2014 – Tickets for the 2014 USA Gymnastics Championships, the national championships for acrobatic gymnastics, rhythmic gymnastics and trampoline/tumbling, go on sale today at 10 a.m. ET. Scheduled for July 15-19, the five-day event, held at both the Kentucky International Convention Center and the KFC Yum! Center, features competition on the junior and senior elite and Junior Olympic levels for each discipline. The finals for the majority of the senior elite events are set for Saturday, June 19, at the KFC Yum! Center, beginning at 6 p.m.

Evening session tickets at the KFC Yum! Center are: July 17, $20; July 18, $20; and July 19, $25. The all-session pass, which grants access to all sessions at both venues, is $75. A $25, single-day pass is available for the events at the Kentucky International Convention Center onsite on competition days. Tickets may be purchased at the KFC Yum! Center or Kentucky International Convention Center box offices, ticketmaster.com, all Ticketmaster outlets, or by phone at 1-800-745-3000. Group discounts are available for groups of 10 or more by calling 502-566-5152 or emailing grouptickets@kentuckycenter.org. For special pricing for gymnastics clubs, contact the KFC Yum! Center at 502-690-9000 or events@kfcyumcenter.com.

The junior and senior elite competition for tumbling and double mini-trampoline and the Junior Olympic sessions for all disciplines are set for the Kentucky International Convention Center. Elite tumbling and double-mini are expected to be held July 18-19, with Junior Olympic sessions across the three disciplines spanning the entire five days. Sessions begin at 9 a.m. on all five days. Due to the number of competitors, the schedule for the convention center will be finalized when the field for all three disciplines are set.

Louisville has twice hosted the acrobatic gymnastics nationals, as well as the 2013 Region 4 Trampoline and Tumbling Championships. The Louisville Sports Commission and AEG Facilities are the local partners for the event.

Trampoline events involve athletes using trampolines that can propel them up to 30 feet in the air, during which they can perform double and triple twisting somersaults. Tumbling utilizes elevated rod-floor runways that enable athletes to jump at heights more than 10 feet and execute a variety of acrobatic maneuvers. For the double-mini competition, the athlete makes a short run, leaps onto a small two-level trampoline, performs an aerial maneuver and dismounts onto a landing mat. Synchronized trampoline demands the same athletic skill as individual trampoline, while adding the element of precision timing. Using two trampolines, two athletes perform identical 10-skill routines at the same time. Trampoline was added to the Olympic Games in 2000, and at the 2012 Olympic Games in London, the USA had its first athlete in history advance to the finals.
Background information