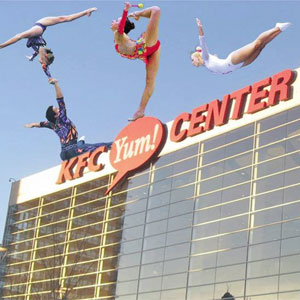 INDIANAPOLIS, Dec. 5, 2013 – USA Gymnastics has awarded Louisville, Ky., the 2014 USA Gymnastics Championships, a new event that showcases the national championships for acrobatic gymnastics, rhythmic gymnastics and trampoline/tumbling. Scheduled for July 15-19, the five-day event will feature competition on the Junior Olympic and junior and senior elite levels for each discipline. The competition will be held at both the Kentucky International Convention Center and the KFC Yum! Center.

“We appreciate the support we have received from the highest level of Louisville’s leadership – the Mayor, the Louisville Sports Commission, AEG Facilities and others,” said Steve Penny, president of USA Gymnastics. “Louisville’s experience in handling major events and its ability to build this type of partnership are critical when a city is hosting an event of this nature. We are confident that Louisville will be the perfect city to debut this championship event, which is designed to have something for everyone. From the beauty and grace of rhythmic gymnastics to the impressive balance and creativity of acrobatic gymnastics to the high flying and powerful skills of trampoline and tumbling, this is truly a unique undertaking.”

Louisville has twice hosted the acrobatic gymnastics nationals, as well as the 2013 Region 4 Trampoline and Tumbling Championships. The Louisville Sports Commission and AEG Facilities are the local partners for the event.

“Hosting the national championships for three gymnastics disciplines during a five-day span represents enormous opportunity and responsibility,” said Karl Schmitt, the Louisville Sports Commission executive director. “Louisville will be highly energized when more than 2,000 athletes, coaches and officials, along with their families and friends, visit us for a week in July 2014. We appreciate USA Gymnastics selecting Louisville as a host city for an event of this magnitude and are confident that the local partnership comprised of AEG, the Sports Commission, the Convention & Visitors Bureau and Kentucky State Fair Board – along with our local community – will create a tremendous experience for the athletes, families and fans.”

“On behalf of AEG Facilities and the Louisville Arena Authority, we are honored to host such an elite event at the KFC Yum! Center,” said Dennis Petrullo, general manager for the KFC Yum! Center. “The commitment to this event from our dedicated AEG team along with the efforts of our partners the Louisville Sports Commission and Kentucky International Convention Center will ensure widespread community, gym club and corporate support for this marquee event. We are thrilled to put the national gymnastics spotlight on Louisville next July.”

The preliminary competition schedule, which is subject to change, for the five days is as follows.

Tickets for the event will go on sale in early 2014.